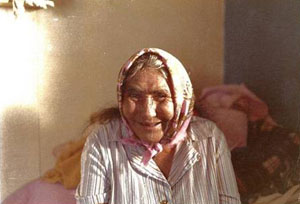 Sarah Peters was born on January 7, 1894 to Roderick and Ellen (last name unknown). She married Peter Ga’ahdoh, son of John and Louisa Ga’ahdoh. They had many children, but only four reached adulthood.

Sarah spent much of her life on the land with her family. She was known for her wit and charm, and was a well-respected woman of the Teetł’it Gwich’in. She was well known for speaking her Gwich’in language fluently and could also understand some Inuvialuktun. A great storyteller, Sarah was instrumental in passing on Gwich’in legends and stories of life on the land. To the delight of the Gwich’in and the general public, in the early 1970s CHAK Radio (later CBC) recorded Sarah telling these stories. These recordings are preserved in the COPE Collection at the Northwest Territories Archives, which are located at the Prince of Wales Northern Heritage Centre in Yellowknife.