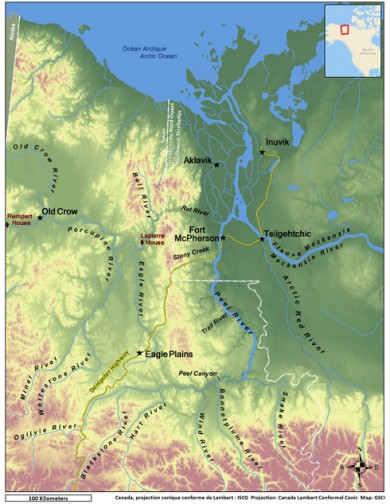 We are one of the most northerly Aboriginal peoples on the North American continent, living at the northwestern limits of the boreal forest. Only the Inuit live further north. We are part of a larger family of Aboriginal peoples known as Athapaskans, which include the Slavey, Tłįchǫ (Dogrib), Han and Tutchone, but our language and way of life are distinct.

At the time of contact with Euro-Canadians, we lived in nine bands, and our lands stretched from the interior of Alaska through the Yukon and into the Mackenzie Valley [Map]. Today, we number over 6,000 people worldwide. About 3,300 of us live in the Northwest Territories, primarily in the communities of Aklavik, Fort McPherson, Inuvik and Tsiigehtchic, where we are known respectively by the following names: Ehdiitat Gwich’in, Teetł’it Gwich’in, Nihtat Gwich’in and Gwichya Gwich’in. In the Yukon, we call ourselves the Vuntut Gwitchin and live primarily in Old Crow, a village of 280 people, but there are 800 of us worldwide. We all maintain close cultural and family ties with our Gwich’in relatives in Alaska.

The lands of the Gwich’in now living in the Northwest Territories traditionally extended from the mountain headwaters of the Peel and Arctic Red rivers in the south to the Mackenzie Delta in the north, and from the Anderson River in the east to the Richardson Mountains in the west. The lands of the Vuntut Gwitchin are located in the northern Yukon and stretch from Canada’s western border with the United States to the Peel River and Richardson Mountains, and from northern Ivvavik National Park to the Ogilvie Mountains. Many of our families still maintain summer and winter camps outside our communities. Hunting, fishing and trapping remain important, both culturally and economically, with caribou, moose and whitefish being staples of our diet.

The Gwich’in of northern Canada signed comprehensive land claim agreements with the federal and territorial governments in 1992 (Northwest Territories) and 1993 (Yukon). These agreements allow our people to further develop self-government, give us responsibility for the general welfare of our citizens, and provide for the good government of our communities, lands and resources.