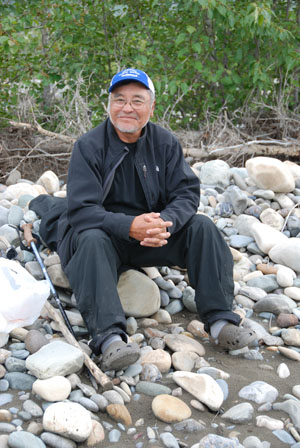 Walter Alexie, the son of Abraham and Bella (Martin) Alexie, was born in 1931 in the Yukon, in the upper Blackstone River area.

In his earlier years, Walter lived on the land in the Trail River area, where he still maintains a camp today, returning to hunt, trap and enjoy bush life throughout the year. He and his wife, Enna, had seven children. In 1960, the family moved to Fort McPherson so that the children could get an education. Walter worked for the Northwest Territories Power Corporation for 31 years, initially looking after the power plant and then as plant superintendent.

Walter Alexie was one of the earliest and longest-serving (1997–2007) board members of the Gwich’in Social and Cultural Institute (GSCI). Due to his encyclopedic knowledge of the land and culture, he has been an integral part of many GSCI oral history and ethno-archaeology projects. He enjoys passing on his knowledge to all who are interested, and people know that they are in good hands when travelling with him on the land.

Walter says that keeping his culture and language alive is important, as is hunting and living on the land. He feels that it is important for young people to be well educated, both academically and culturally. People call upon Walter’s knowledge and expertise often, and feel fortunate that he is always willing to share his knowledge about the land, and Gwich’in culture and history.