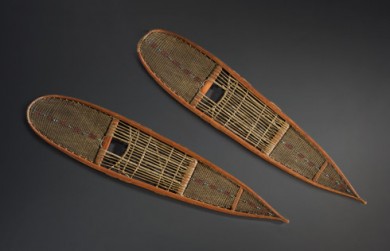 “In ts’ii deii days, snowshoes, eih, were the main means of transport in a land covered by snow for eight months of the year. They made it possible to hunt in areas that a hunter travelling on foot would have been unable to reach. They allowed the families to move camp. They were sometimes even used as snow shovels when the families set up camp at a new site. Other means of transport have changed: the Gwichya Gwich’in began to use dog teams when the fur traders arrived; skidoos have replaced dog teams, but today’s hunter and trapper relies on snowshoes as much as did his ancestor during ts’ii deii days.” — Michael Heine et al., 2007
“The frame was coloured with red ochre, tsaih. Traditionally, only the women’s snowshoes were coloured ... When taking tsaih, it was important to leave something else in place. If this was not done, bad weather, or even a storm, might be caused ..." — Michael Heine et al., 2007