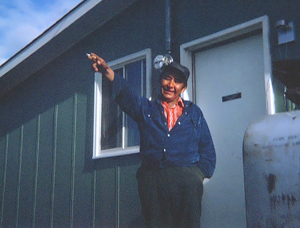 Roderick Peters, or Roddy, as he was known, was born on the Peel River on February 17, 1926, one of the many children of Peter Ga’ahdoh and Sarah Peters (Drymeat). He was educated on the land, and in his youth, he also attended school in Aklavik and Fort McPherson. He never married.

Roddy was a good hunter, trapper and fisherman. He cared for his mother all his life, and from her and his grandmother learned about life in the old days. He gladly shared with others the Gwich’in legends and stories they taught him. In the early 1970s, CHAK Radio (later CBC) recorded many of the Gwich’in stories told by Roddy and his mother. Today, these recordings are preserved in the COPE Collection at the Northwest Territories Archives, which are located at the Prince of Wales Northern Heritage Centre in Yellowknife.