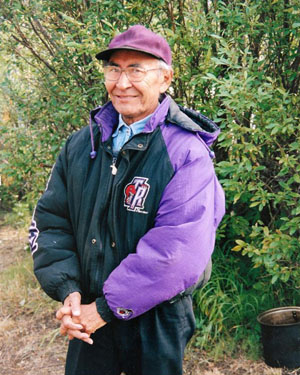 Charlie Peter Charlie was born on May 28, 1919 at Teetl’èenjùu, in Crow Flats, northern Yukon. He was the oldest child of Peter and Mary Tetlichi. Raised in the traditional fashion, he was taught to hunt, fish, trap and care for his people. Gwich’in was his first language, and he was fluent and literate in it, as well as in English.

In 1939, Charlie Peter Charlie married Fannie Tizya, and they raised sixteen children, two of whom were adopted. Charlie became known as an excellent fiddler, playing long into the night during Gwich’in celebrations.

In 1955, Charlie was elected chief of the Vuntut Gwitchin, the second chief elected through formal voting, following long-term chief Peter Moses. He was chief of a changing nation, as his people moved towards land claims and a more sedentary lifestyle. His active participation in a territory-wide organization, the Yukon Native Brotherhood, testified to the value he placed on working towards the good of the community. His dedication and contributions were recognized on behalf of all Canadians when he was made a member of the Order of Canada in 1988.

Charlie provided important assistance to researchers studying everything from archaeology to ornithology in the northern Yukon. He worked with linguists as well, recording the Gwich’in language and place names.

Charlie Peter Charlie passed away in 2008.