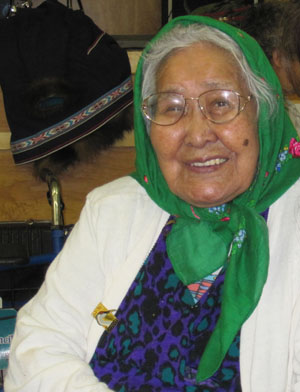 Mary Kendi was born on March 4, 1915 during the spring muskrat hunt, at Pokiak Channel (near present-day Aklavik), Northwest Territories. Her parents were Paul Koe and Elizabeth Vittrekwa. At the time, there were only trading posts in the area and, as Mary later explained, the Gwich’in did not live in the delta year-round, as they do today.

Mary spent the early years of her life in the delta, in Fort McPherson and at Nagwichootshik, a village at the mouth of the Peel River. Fishing was good, and there were lots of ducks and fur-bearing animals in the region. Her family’s main cabin was located there, and they hunted into the mountains, travelling as far south as the Ogilvie Range.

When Mary was six years old, she was sent up the Mackenzie River on a steamboat, to go to boarding school in Hay River. She was one of 22 children leaving Fort McPherson, and when they reached Tsiigehtchic, more children were picked up. Many were crying because they missed their parents. Some of those children stayed in school for as long as five years without seeing their parents. Mary went home after three years in Hay River because her uncle Andrew, who worked on the steamboat as a deckhand, took her out of school. She spoke sadly of this because she felt that she was just starting to learn. However, she understood that her uncle was trying to protect her: many children were dying from the flu or measles at the time, and he didn’t want her to get sick. When she returned home, Mary learned how to live on the land. She also relearned her language. Speaking about those years, Mary explained, “No one stood around and did nothing. Even a young child would want to do something and would try to do their own chores.”

In 1932, Mary married Alfred Kendi, who was from the Yukon, in an arranged marriage. They lived in the bush, hunting, trapping and fishing around Aklavik, and raised nine children, one of whom was adopted. Alfred passed away in the 1960s.

Throughout her life, Mary Kendi has been an active member of the Anglican Church, belonging (as had her mother before her) to the Women’s Auxiliary and the Women’s Institute. In 1977, she and Bella Ross, of Fort McPherson, were invited to join a Women’s Institute trip to Nairobi, Kenya. Mary talks excitedly about that trip and the people she met. It was clearly the trip of a lifetime for her.

One of the founding board members of the Gwich’in Social and Cultural Institute, Mary was a great inspiration, teacher and source of strength to the organization. In her role as instructor of traditional knowledge and culture at the Institute’s annual Gwich’in Science Camp, she spoke strongly about the importance of educating young people well in the ways of today’s world and in those of their ancestors. She also stressed that it is important for them to know their history and the teachings of their ancestors: “I hope someday that [the children] will look at their ancestral life as a part of the life that they are living now. If they have two ways of life together, their life would be good. But if they do not pay attention to their history, I do not know their future.”

In 1992, Mary was one of the first women in the Northwest Territories to receive a Wise Women Award, an annual award given by the Status of Women Council of the Northwest Territories. The award recognized and honoured Mary for her many years of dedication to her community. She has made it a better place and has been a positive role model for everyone, especially the youth.

Today, Mary Kendi continues to live in Aklavik. She is always willing to share her stories and knowledge, and delights visitors with her great sense of humour and warm smile.