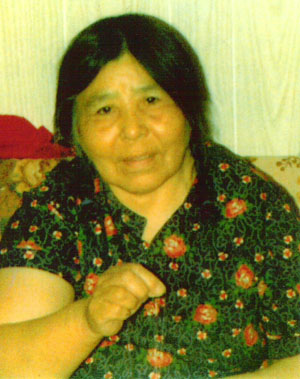 Louisa Snowshoe was born in the Blackstone River region, Yukon Territory, on August 16, 1912. Her parents were Abraham and Martha Alexie. When Louisa was very young, her mother died. Her father remarried, and Louisa lived with him and her stepmother, Bella, until she was sent away to school in Hay River. When she returned to Fort McPherson, she worked at Fleming Hall (a 100-bed hostel for Aboriginal students) for nearly fourteen years.

On January 1, 1930, Louisa married William Snowshoe. They had five children, and Louisa later raised six of her grandchildren.