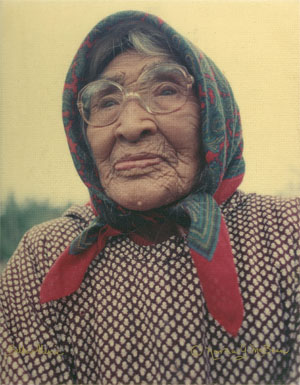 Bella (Martin) Alexie was born on November 27, 1892 near Fort McPherson, Northwest Territories. Her parents were Martin and Jane. Since they did not have English surnames, Bella used the surname Martin. When she was very young, her mother died, leaving three daughters and three sons. Following their mother’s death, the eldest daughter, Annie, cared for the family.

Bella’s first husband was John Andrew, whose Gwich’in surname was Deyah. The couple lived around Blackstone, in the Yukon, and had four children. They also raised John’s nephew. After John died, Bella married Abraham Alexie, a widower, on December 26, 1923. They lived happily together until Abraham died in 1976. In addition to their eight children, they raised Abraham’s two daughters from his first marriage and his nephew.

Bella (Martin) Alexie passed away on March 19, 1995. We are fortunate that some of her stories are preserved in the COPE Collection at the Northwest Territories Archives, which are located at the Prince of Wales Northern Heritage Centre in Yellowknife.