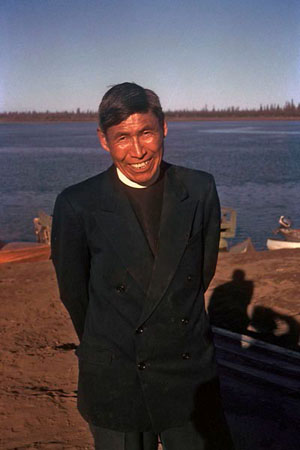 Jim Edward Sittichinli was born on November 22, 1908, one of nine children born to Edward and Annie Shadah Sittichinli. He grew up on the land around Fort McPherson, Northwest Territories. Jim was a talented man and earned a living through hunting, fishing and trapping.

On December 25, 1933, Jim married Julia Greenland, and they moved to Aklavik, where they stayed for many years and raised a large family. In 1960, he was ordained a priest in the Anglican Church and assumed charge of the mission and All Saints Cathedral in Aklavik. He also lived in Tuktoyaktuk for a few years.

Jim was well known for his willingness to share his knowledge of life in the old days. We are fortunate that some of his stories are preserved in the COPE Collection at the Northwest Territories Archives, which are located at the Prince of Wales Northern Heritage Centre in Yellowknife.