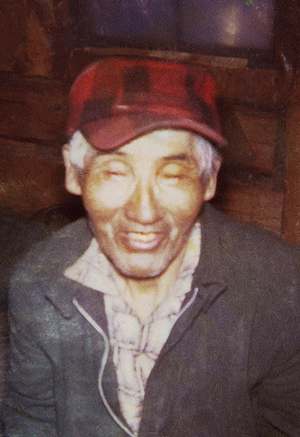 Paul Bonnetplume was born to Andrew Niishee and Maria on July 1, 1894, up the Peel River. At the age of 29, he married Jane Sintenilyin (Shint’eh Nił’in) George, the eldest daughter of Old Robert and Annie George. Together, they had three daughters. On July 15, 1933, Jane died, having been ill. Paul married Sarah Mitchell on January 2, 1935, and they had eleven children. Sarah also helped raise Paul’s children from his first marriage.

Paul lived most of his life on the land, up the Peel River and, during the spring season, down in the delta. He was a good hunter, trapper and fisherman, and provided for his family. Paul moved to Aklavik, where he raised his family until 1973, when he moved back to Fort McPherson. His stories about his travels and life on the land, as well as the Gwich’in legends he narrated, are preserved in the COPE Collection at the Northwest Territories Archives, which are located at the Prince of Wales Northern Heritage Centre in Yellowknife.