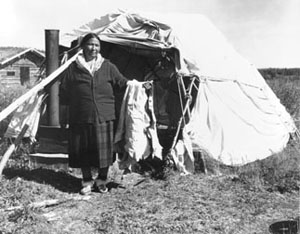 Sarah Abel was born on April 10, 1896 on the Chandalar River, near Fort Yukon, Alaska. Her parents were Joseph and Catherine. Times were hard, and the family followed the caribou, moving wherever there was food. One of these places was New Rampart House, Yukon. When Sarah was about three years old, her mother died while they were visiting New Rampart House. Unable to care for his child, her father gave her to Peter and Myra Moses, who adopted her. It was around the time the border was drawn between Alaska and the Yukon.

In 1913, at the age of seventeen, Sarah married Abel Chitze. They lived at Whitefish Lake, 48 kilometres up the Porcupine River from Old Crow. They had seventeen children. In 1944, Abel passed away, but Sarah remained in the area for another six years, raising her family by trapping and hunting.

In 1950, Sarah moved to Old Crow. She became actively involved in the community and the Church. She was the first female council member of the Vuntut Gwitchin First Nation and president of the Old Crow Women’s Auxiliary. As a well-respected spokeswoman, she endeavoured to set an example for the younger generations. Her last recorded speech was on the occasion of her 100th birthday, on April 10, 1996.

An esteemed Elder and matriarch of the community, Sarah provided a source of strength and guidance, with wisdom gleaned from the past, teaching many traditions and stories of her people to Native and non-Native alike. She was Grandma Sarah to all who came to know her.