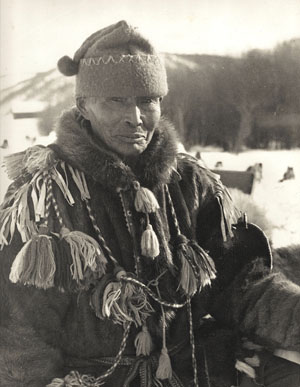 Andrew Kunnizzi (Ganiizhii) was born on March 7, 1892 to Old Kunnizzi and his wife (her name is not known). When he was a young man, he married Elizabeth Simon, with whom he had fifteen children.

Andrew is famous for many things, including being a member of the party that retraced the Dawson Patrol route from Fort McPherson to Dawson, Yukon, in February 1970. He lived in the Dawson region and in other areas of the upper Peel Watershed. Many of his stories about the Yukon are preserved in the COPE Collection at the Northwest Territories Archives, which are located at the Prince of Wales Northern Heritage Centre in Yellowknife.

Andrew Kunnizzi also worked for the Anglican Church for many years and was a full-time catechist. He passed away on January 16, 1978.