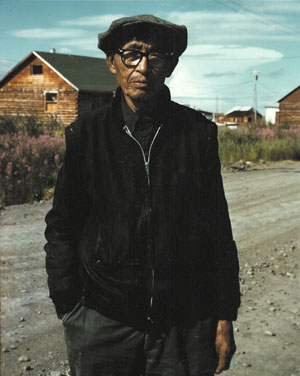 Elijah Andrew (Chuuzhaati’) was born to Andrew Chuuzhaati’ and Julia Bonnetplume on March 26, 1892, in the Yukon. On July 15, 1918, at the age of 26, he married Annie Snowshoe, daughter of Peter and Mary Snowshoe of Fort McPherson. They had eleven children, one of whom was adopted.

Elijah and Annie spent most of their lives travelling in the mountains with other Peel River Gwich’in families. Spring seasons were spent down the Peel River, on the Neyook River, between Aklavik and Fort McPherson. On May 3, 1952, following a lengthy illness, Annie passed away.

Elijah was known as a singer and drum carrier (someone who was looked up to as a drum maker and who carried on the tradition of drumming). He sometimes played with his friends at dances. He was also known for his ability to tell stories, some of which are preserved in the COPE Collection at the Northwest Territories Archives, which are located at the Prince of Wales Northern Heritage Centre in Yellowknife.

A great hunter, fisherman and trapper, Elijah spent most of his life on the land with his family and was a good provider. He passed away on November 23, 1977.