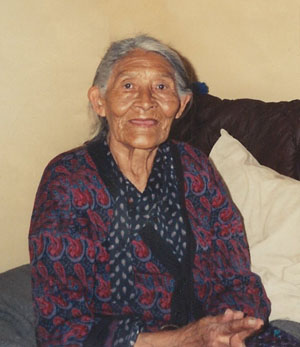 Christie Thompson was the daughter of Louisa and Peter Salu, elder brother of Chief Julius (the last hereditary chief and, in 1921, the first elected chief of the Teetł’it Gwich’in). Christie was born and baptized at Moosehide, in the Yukon, on January 1, 1905. On July 4, 1921, she married Charlie Snowshoe. They had five children, three of whom died in the 1930s. Christie’s husband also died at that time (in 1934).

On September 5, 1940, Christie married Jimmy Thompson. Christie and Jimmy had six children and adopted two others, one of them a grandchild. They earned their living on the land, spending much of their time at the mouth of the Peel River. Even in her late years, Christie went into the bush whenever she could. She also practised traditional skills, tanning and sewing hides, and making webbing for snowshoes.

Christie believed in going to church, living a good Christian life, and visiting and comforting those who were sick. She was also a fine storyteller, and we are fortunate that some of her stories are preserved in the COPE Collection at the Northwest Territories Archives, which are located at the Prince of Wales Northern Heritage Centre in Yellowknife.