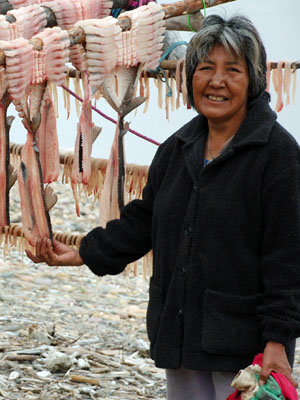 Agnes Mitchell was born on August 17, 1953 in Aklavik, Northwest Territories. In her youth, she lived with her parents, Eliza and Hyacinthe Andre, in a camp at Tree River, about 73 kilometres from Tsiigehtchic, upstream on the Mackenzie River. During that time, she learned to work in the bush, and to tan and sew hides.

Agnes married Harold Mitchell on August 31, 1981, in Tsiigehtchic. They had four children and lived for a few years in Inuvik before moving to Tsiigehtchic. Harold passed away in 1993.

Agnes speaks Gwich’in and English, and is an accomplished sewer of Gwich’in traditional crafts. She now lives in Edmonton and works at Larga Home, a residence for patients from the North.