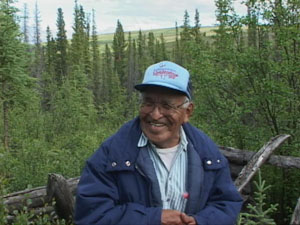 Charlie Thomas, the oldest son of John and Mary Thomas, was born at New Rampart House, Yukon, on June 25, 1916. Reverend Amos Njootli baptized him there on July 2, 1916.

Charlie spent his early years around the New Rampart House area, particularly at Howling Dog, where he was raised. He moved to Old Crow when he was 22 and continued to trap towards Whitestone Village and in his family’s area in Crow Flats. Soon after arriving in Old Crow, he met Jessie Nukon, who became his wife in 1940. They adopted two children, Florence and Willie. The family lived off the land.

Charlie is remembered as a descendant of the owner of the Thomas Creek caribou fence, one of the last caribou fences to be in operation at the turn of the 20th century. He lived by the values represented by this massive, cooperative enterprise.

Charlie Thomas passed away in 2009.