Little is known about Pierre de Troyes’ past. The man who left his mark on Hudson’s Bay, mostly around modern-day James Bay and who died at Fort Niagara was probably from Champagne or Normandy. The son of Alard and Michel de Troyes, suppliers to the Parliament in Paris, he was married in 1681 and a member of the officer corps of the Piedmont regiment. His stamina and daring indicate that he was probably less than 40 years old when he first arrived in New France. 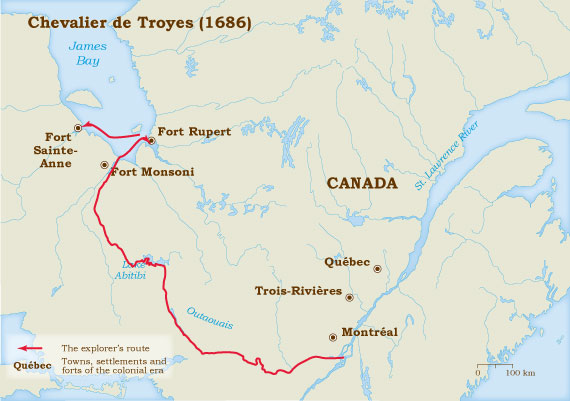 Having been appointed, on March 5, 1685, captain of a company of marines on duty in the colony, Pierre de Troyes lands at Québec on August 1, 1685. The Governor, Jacques-René de Brisay, Marquis de Denonville, the successor to Antoine Le Febvre de La Barre, is aboard the same ship.

Denonville immediately throws his support behind the Compagnie du Nord or Compagnie française de la baie d’Hudson, which had been created five years earlier at the instigation of de Charles Aubert de La Chesnaye. Like the Company’s associates, he wishes to retake Fort Bourbon, which had been set up in 1682 at Hudson’s Bay and seize the settlements occupied by or built by the English. And so, the new governor agrees that an expedition, which is assembled during the winter of 1685-1686, will be financed by the Compagnie du Nord.

On February 12, 1686, Denonville orders “au sieur de Troyes” to leave Québec “to occupy the posts on the shores of the Northern Bay”. The troop consists of 30 soldiers and 70 Canadians chosen for their ability to travel. canoe and fight. A drummer, an interpreter, one or more carpenters and a blacksmith are part of the group which is equipped with swords, tools, pickaxes, spades and shovels. Three brothers who will be famous someday are in charge of three separate groups of about 30 men. They are Pierre Le Moyne d’Iberville, Paul Le Moyne de Maricourt et Jacques Le Moyne de Sainte-Hélène, all from Montréal.

On March 3, after attending mass at the church of Notre-Dame in Montréal, the troops head for rivière des Prairies. From the Lake of Two Mountains, they turn towards the Ottawa River. On April 9, they travel up the Long Sault (the Carillon rapids) and, two days later, they reach the portage point at Chute-à-Blondeau. On May 1st , they set up camp on the future site of Fort Coulonge where, faithful to tradition, the men plant a may tree and fire a salvo in front of the tents of Pierre de Troyes and the Le Moyne brothers.

To Abitibi and James Bay

On June 10, just as the party is about to reach the point where the Abitibi River and Moose River meet, the canoe carrying Noel Leblanc, one of the best Canadians in the troop, capsizes. Reaching James Bay itself around June 19, de Troyes must select what will be the first of three targets: Fort Monsoni (Moose Factory), Fort Rupert (Charles), or Fort Quichichouane (Albany); all are situated at the near end of James Bay. Fort Monsoni is the closest and with easy access. On June 20, after returning from a reconnaissance mission on the Monsoni River, d’Iberville confirms that it is “time to strike”. They construct a battering ram and hone the blades of their swords.

Many battles and many victories

The same day, June 20, 1686, the men surround Fort Monsoni, neutralize the English cannons, recapture La Sainte-Anne, an old sailing ship which the English had seized and charge the fort, swords in hand. “I discovered that I had great difficulty,” writes the chevalier de Troyes, “trying to stop the assault of the Canadians who, screaming like savages, demanding the opportunity to use their knives.” The battle lasts half an hour.

The captain wavers between an attack on Fort Rupert, located on the Nemiskau River, Fort Quichichouane, on the Sainte-Anne River or Albany. He decides on Fort Rupert where a ship lies at anchor. It will be useful for the attack on Quichichouane. Sainte-Hélène, who took charge of the scouting mission, returns on July 2, saying that the way is clear. The troops head out in birchbark canoes and, on a date not specified in the reports of the chevalier de Troyes, they take the ship and Fort Rupert without much of a fight because they attacked in the night. After having loaded the ship with furniture and other valuables, they destroy the fort.

Back at Fort Monsoni in mid-July, Troyes plans the rest of the campaign. The next step is to send some of the men by sailing ship and Iberville’s men in the vessel they arrived in. On the 23rd , the ships lay siege to Fort Quichichouane, but the ultimatum given the governor, Henry Sergeant, does not bring about the hoped-for surrender. Supplies are running low. A prayer by the troops to Saint Anne seems to work “The wind changed suddenly and drove our vessel with its battery of eight cannons, which we had not been able to use on the 25 th, the eve of Saint Anne’s day.” On the 26 th, after the usual negotiations over several bottles of good Spanish wine, the English surrender. Quichichouane is renamed fort Sainte-Anne.

The best of our captains

On August 10, 1686, the chevalier de Troyes entrusted d’Iberville with defending Fort Monsoni and returned to Québec. A few weeks after his return, Denonville expressed his satisfaction to the Marquis de Seignelay, Minister for the Colonies :

“The sieur de Troyes is the smartest and the most capable of all our captains. He has the kind of spirit needed to command others. There can be no better example than the behaviour he demonstrated during our Northern undertaking where he needed to be very clever to get the Canadians to deliver the kind of service and dedication they demonstrated. “

The abilities of the chevalier de Troyes explain why he commanded one of the four regiments sent to Fort Frontenac in June 1687 as part of a peace conference to deal with the kidnappings by the Iroquois. For the same reason, he was entrusted, shortly thereafter, with the command of Fort Niagara and a hundred men. He dies there, on May 8, 1688 either from scurvy or from fever caused by eating spoiled food. Ironically. a few weeks earlier, the fort’s few survivors had plotted to kill the chevalier de Troyes and elect their own commander.