The decisive role played by the fur trade in the economy of Canada under the French Regime is well known. A less familiar fact is that by the end of the 17th century, the French colonists were working hard to create local industries. The initiative stemmed from the will of one man: Jean Talon. Appointed intendant of the colony in 1665, upon his arrival he endeavoured to exploit the capacities of the land by introducing looms, founding tanneries, encouraging forestry, and building a brewery in order to limit the importation of hard alcohol.  His efforts were soon rewarded and in 1671 he was able to write the king that he could “now dress from head to toe” in locally made products. 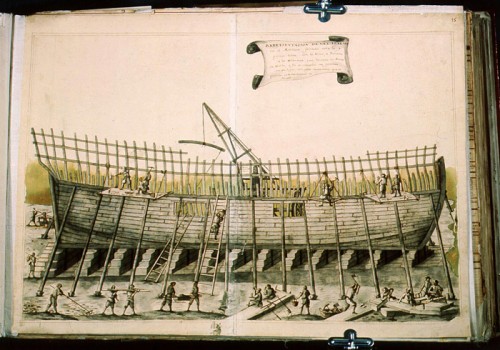 A frigate under construction, first half of the eighteenth century

Jean Talon was not the only person to promote the development of economic activity in the colony. The next article (under development) will propose an overview of emerging industry in New France and the various production facilities: the first mills, built in the 17th century, the royal naval shipyard at Québec and its related industries, tanneries, and the forges of Saint-Maurice. It will also introduce the first Canadian “entrepreneurs,” such as Olivier Morel de la Durantaye and François Poulin de Francheville, and attests to the birth of Quebec business.