Jean Nicollet was born around 1598 in the Cherbourg region, in Normandy. By turn interpreter, explorer, public servant and colonist, Nicollet is one of the most prestigious figures in the history of North American exploration. Since the late 19th century, he has been credited as being as the first European to have sailed around Manitoulin Island to enter Lake Michigan. However, a thorough analysis of the Jesuit Relations for 1640 and 1642-1643, the only sources that allow us to follow Nicollet’s progress to the American Northwest, suggests another itinerary: Nicollet probably carried on past Sault Sainte-Marie – where Étienne Brûlé had stopped – and discovered Lake Superior. 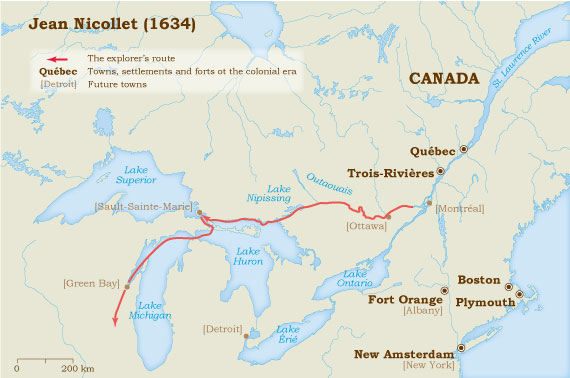 On March 15, 1617, Jean Nicollet signed on with the Compagnie des Marchands to go to New France and serve as an interpreter. “His temperament and excellent memory”, wrote the Jesuits in 1642-1643, “lead us to hope for good things from him”. The same source reports that the young Jesuit arrived in Québec in 1618. As historian Marcel Trudel points out, his stay was a short one. The Nicolet Papers, conserved at the National Archives of Canada, indicate that on May 10, 1619 Jean Nicollet was in France, helping to draft the deed of sale for a property he owned in Hainneville, near Cherbourg.

Upon his return, “he was sent to winter with the Algonquins” of Allumette Island. It was at this strategic location on the Ottawa River that Nicollet was introduced to the language of his hosts and to the miseries of life in the forest. He sometimes went as long as “seven & eight days without eating, and spent seven full weeks with no food other than a little tree bark”. He also acted as a peacemaker: “he accompanied four hundred Algonquins at that time on a mission to make peace with the Hyroquois, which came to a happy end.”

Peace having been assured between the two great nations, Nicollet Nicollet “went to live for eight or nine years with the nation of the Nipissirians (Nipissing)” on Lake Huron and Georgian Bay. Of a liaison with a woman of this nation was born, between 1628 and 1633, Euphrasine-Madeleine, whom he later brought back with him to the colony.

In Search of the Sea People

The first lengthy absence of Jean Nicollet ended on July 19, 1629 with the conquest of the colony by the Kirke brothers. Since Champlain was no longer there, Nicollet apparently rejoined the Huron and convinced them not to trade with the British.

Various events in the interpreter’s professional and personal life allow us to situate around this time – before or after the surrender of the colony – the moment when he was “delegated to voyage to the nation known as the Sea People, & treat of peace with them & the Huron.”

Accompanied by seven guides, Nicollet departed from Huronia, moving southeast on the French River, which empties into Lake Huron. He then skirted the north shore of this lake to Sault Sainte-Marie, which took him into Lake Superior where he found what he was looking for: the Winnebago. Settled on the north shore of the lake, this people led a sedentary life. The Jesuits described them as follows: “Some Frenchmen call them the Nation of Stinkards, because of the Algonquin word ouinipeg meaning foul-smelling water. But as this is their name for salt water, these peoples call themselves the Winnebago, since they come from the shores of a sea of which we have no knowledge, & consequently they should not be called the nation of Foul-Smellers, but the nation of the Sea.”

So Close to Japan and China…

Appointed the ambassador to these people, Nicollet was careful to equip himself with a ceremonial robe and two pistols, to command respect. His hosts referred to him as “Manitouirinio”, or man of wonders. He had no difficulty assembling four to five thousand men to feast and hold counsel with him. With peace established between the Algonquin and the Sea people, the route to the west was opened.

After Nicollet’s return to the colony, before the summer of 1634, the French persisted in believing that if their ambassador “had travelled three days more on a great river which flows from this lake […] he would have found the sea […]. I strongly suspect”, wrote the Jesuit Paul Le Jeune, “that this sea is the Northern counterpart to that in the new Mexico, & that from it one might have access to Japan & China.”

In July 1634, Jean Nicollet left Trois-Rivières at the head of an expedition of 150 canoes making for Huronia. In that country he left three missionaries, including Father Jean de Brébeuf. A few weeks later he was back at his departure point, where Champlain supposedly met him on August 3.

Jean Nicollet settled down in Trois-Rivières. In 1637 he was granted a plot of land near this post, as well as land from a fief co-owned with Olivier Le Tardif. He had married Marguerite Couillard, who gave him two children.

The discoverer of Lake Superior, the man who had “penetrated furthest into these most remote of lands”, did not know how to swim. He died in the waters off Québec in October 1642: “On October 29, the funeral was held of M. Nicollet and three of M. de Chavigny’s men, drowned in a shallop as they were going from Québec to Sillery; their bodies were never found.”