New France disappeared in 1763, but its legacy persists to this day.  The transfer to Great Britain and Spain of the territory occupied and claimed by France brought about a major political transition.  The transatlantic networks which until them had animated the French colonies were reconfigured in fundamental ways.   The French colonial population nevertheless remained firmly rooted.  It did not overnight lose its religion, its customs, or its language.  Colonial institutions were restructured, but many of them retained for many years to come the character they had acquired under the French Regime. 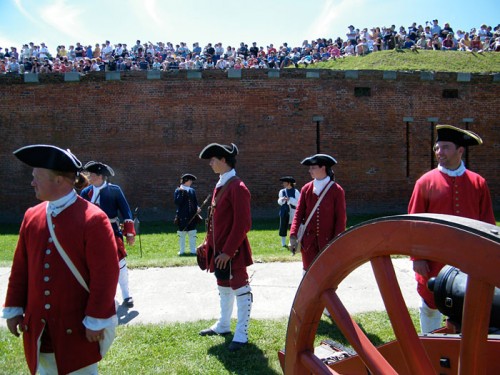 The heritage of New France is omnipresent today.  The populations born of seventeenth and eighteenth century migrants continue to blossom, not only in Quebec, but through Canada and certain regions of the United States.  With a little genealogical research, the gap between that era and our own is easily narrowed.  The heritage of New France also shows through the particularities of the French language as it is still spoken in North America.  French and Aboriginal place names, fixed by explorers and pioneers, etch traces of this founding epoch across the continent.

Since the beginning of the twentieth century, New France has also been commemorated in more explicit ways.  From the tercentennial of the foundation of the city of Quebec, in 1908, to the two hundredth and fiftieth anniversary of the Battle of the Plains of Abraham, in 2010, solemn ceremonies and historical reenactments have abounded.  Monuments to founding figures and events have proliferated.  Many historical sites have been reconstructed and animated through the efforts of governments and devoted lovers of history.  New France, as it turns out, has not entirely disappeared.