Jacques Marquette was born June 10, 1637 in Laon, in the old French province of Aisne. He was 17 years old when he entered the Jesuit novitiate in Nancy, where it was not long before he had decided what he wanted to do with his life: “Would that I be ordered to set out for foreign lands. This has been the object of my thoughts since my earliest childhood.” He revisited the idea in 1665, at the end of his university studies, when he wrote to his superior: “Previously, I felt inclined toward the mission to the Indies; today, I would most gladly venture to whichever country it might please you to send me.” In 1666, Jacques Marquette was assigned the missions to Canada, where he arrived on September 20. Little did he know he was to be the initiator of the first exploration of Mississippi by the French. 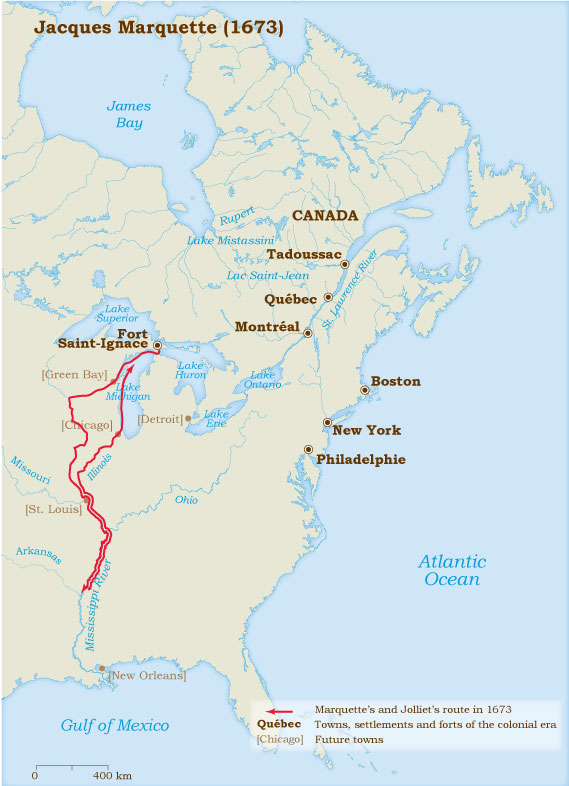 The Journal des Jésuites reports that, the following October 10, Marquette “went up to Trois-Rivières to study the Montagnais language with Father Druillettes”. In December he was at Cap-de-la-Madeleine to learn Algonquin. “I find no difficulty with languages unrelated to ours,” he wrote on August 4, 1667; “today I am starting on that of the Manate country, and this winter I shall learn Montagnais.”

On May 20, 1668, Jacques Marquette left Québec – never to see it again – for Sault Sainte-Marie to support the Jesuit Claude Dablon in his evangelization work there among the Ottawa Indians.

Most of the Natives crossing between Lakes Huron and Superior would stop at Sault Sainte-Marie. It was they who, since the voyages of Étienne Brûlé, had been telling of the proximity of the Northern sea (Hudson Bay), and they who provided Jacques Marquette with a description of the “Missispi” river, whose existence had long been known to the missionaries.

In the fall of 1669, Jacques Marquette reached the western end of Lake Superior where he founded “the mission of Pointe du Saint-Esprit”, an establishment adopted by the Ottawa and Huron. They soon encountered some “new peoples”, including the Illinois, who were familiar with part of the “Missispi”. Anxious to go there in the spring, Marquette spent the winter learning the language of the Illinois. But he knew his limits: he had to have authorization to undertake such a hazardous voyage, and he had to be accompanied.

We have no records to confirm exactly when Jacques Marquette discussed his project with Louis Jolliet. Their meeting may have taken place in Sault Sainte-Marie in the summer of 1671. The explorer was there on June 4, when Simon Daumont de Saint-Lusson took official possession of the western territories. It was also at the Sault that Marquette took his perpetual vows, the following July 2. The events that followed show that the two men saw the exploration of the Mississippi as a joint project.

Unfortunately, a state of tribal warfare forced Marquette to abandon the Lake Superior mission and return to the Michillimakinac (Makinac) region. While Jolliet went back to Québec, the missionary chose Manitoulin Island as the site for the founding of the Saint-Ignace mission in late July 1671.

Where Does the Mississippi Go?

Louis Jolliet was apparently the one whose arguments transformed Jacques Marquette’s evangelization project into an official expedition to follow the Mississippi. When he left Québec on October 5 or 6, 1673, Jolliet was in possession of a letter authorizing the missionary to accompany him in the search for the source of the Mississippi. On December 8, Jolliet arrived at the Saint-Ignace mission, which in the meantime had been moved to Michillimakinac. Marquette wrote that he bore “the orders of the Count de Frontenac Our Governor and of Mr. Talon, our Intendant, to venture upon this Exploration with me. I was the more delighted at this Good news, in that I beheld my designs coming to fruition […]”

The two men set out on May 17 with a crew of five and two canoes. They crossed the Straits of Michillimakinac, and then skirted Green Bay (Baie des Puants) west of Lake Michigan. There they met with the Menominee, who exhorted them to go no further. Marquette and Jolliet continued nonetheless on their route to the west via Fox River. A portage brought them to the Meskousing (Wisconsin) river, which took them to the Mississippi, which they entered on June 17.

Continuing to the south, they saw the Missouri first, then the Ohio, and for more than 450 kilometres, the banks washed by the Mississippi. They were now convinced that by keeping west they would reach California and the “Vermilion Sea” (Pacific Ocean), and that by moving south they would come to the Gulf of Mexico. But they were to go no further: as Marquette wrote, “We felt that we were exposing ourselves to losing the fruit of this voyage, of which we could publish no knowledge were we to fall into the hands of the Spaniards, who no doubt would have held us captive, at the least”. The voyage back began in mid-July. The group left the village of the “Akensae” following the direction of the Mississippi. They travelled northeast on the Illinois River as far as Lake Michigan and Green Bay.

Death in the Forest

The discovery of the Mississippi was a comfort to Jacques Marquette in his desire to extend the influence of the missionaries to the west and south. In October 1674 he left Green Bay to found a mission among the Illinois, whom he and Jolliet were the first Europeans to have visited.

In December, his health obliged him to stop at Chicago, from which he set out again on March 30, 1675. On April 8, he halted at a village where he founded the mission of the Immaculate Conception of the Blessed Virgin. Jacques Marquette died the following May 18 “in the midst of the forest”, near the present-day city of Luddington, Michigan. He was 38 years old. A year later, his remains were exhumed and conveyed to the Saint-Ignace mission.