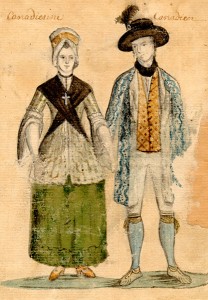 Canadian couple, second half of the eighteenth century

Before a colony can be established in a given place, men and women must go there, live there, occupy the territory and develop an economic activity. The population is the heart of the colony; it sustains the colony, makes it prosper, defends it and transforms it. It is, therefore, particularly important to know who lived in New France.

That is why, in this section, you will find information on the colonists: where they were from, their background and what might have motivated them to come to North America. You will see how the society the colonists formed was organized and how each of its components lived.

You will also gain an understanding of the role and importance of the colony’s religious congregations, which, from the outset, sought to evangelize the Aboriginal population. Finally, you will discover a little-known aspect of the history of New France that you may not be familiar with: slavery.