A career soldier, Daniel Greysolon Dulhut was born around 1636 at Saint-Germain-de-Laval, near Lyon. The son of Claude Greysolon and Marie Patron, he is a member of French nobility. In one of his writings, he hints that he travelled to New France twice before settling there.

In 1673, he is a horseman in the French Guard. Later, as squire to the marquis de Lassay, he takes part in a military campaign in Franche-Comté. Surviving the major battle at Seneffe (Belgium, August 11, 1674), he packs his bags and heads for New France. His uncle, the merchant Jean-Jacques Patron and his brother, Claude Greysolon de La Tourette, will soon follow him. The former is no doubt the person who finances his nephew’s first expeditions. The latter, who was born in 1660, will join his brother on his second campaign. 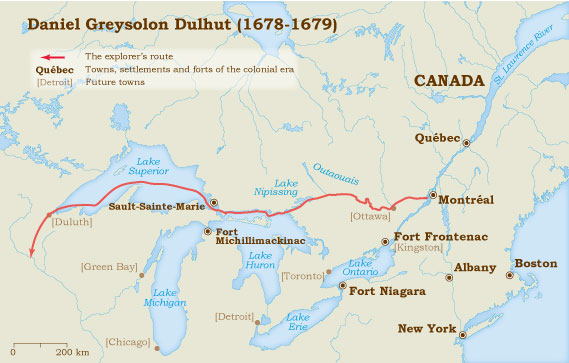 Daniel Greysolon Dulhut lands at Québec near the end of 1674. At that time, he has no particular purpose nor any obvious political mission nor any known political relatives. Settling in Montréal in the early summer of 1675, at first, he rents a furnished house, which he will eventually replace with a stone one built for him. Various notarized documents recorded over the next three years show him to be living the life of a dilettante while ingratiating himself to the most important families in the city.

In a letter sent to Minister Seigneley in 1682, Dulhut states that immediately upon his arrival in the colony, he took an interest in the French and Iroquois conflicts which where hindering the north-south fur trade. After assessing the situation, he concluded that New France had to act urgently to establish commercial relations with the tribes living to the west of the Great Lakes.

On September 1, 1678, Daniel Greysolon Dulhut, seven Frenchman and three slaves which he had been offered, secretly leave Montréal, heading for Lake Superior. The party travels down the Ottawa River to Lake Huron. They will camp at the headwaters of the lake, just past the rapids at Sault Sainte-Marie. His goal, Dulhut will later write in 1682, is to convince the tribes living there to ” make peace with all the other nations around Lake Superior, who all live under the rule of our invincible monarch. “

How can Dulhut take it upon himself to deal, in secret, with a problem that affects everyone? There may have been three reasons for this discreet approach. On the one hand, a royal decree dated April 15, 1676, which forbids anyone from ” engaging in the trading of pelts in the Indian villages “, is still in effect. On the other hand, it is likely that the Governor, Louis de Buade de Frontenac, supported Dulhut’s undertaking but was not able to do so publicly. Finally, Dulhut leaves just two weeks prior to Robert Cavelier de La Salle’s return to the colony. Operating under the protection of the Governor, de La Salle has exclusive rights. He will be the only Frenchman to explore western North America, the area between New France, Florida and Mexico.

The negotiations between Dulhut and the chief of the Saulteur Indians, the first tribe he deals with, start on December 15, 1678. They end with a promise to take part in peace talks with the Sioux, who dominate all of Lake Superior and the surrounding valley. Dulhut apparently spends the rest of the winter swapping trinkets for furs. In the summer of 1679, he heads towards the end of the lake, claiming any sites where he happens to stop. Exploring the various Sioux villages spread through the area around Lake Buade (Mille-Lacs Lake), he may have reached as far as the Falls of Saint Anthony (Minneapolis, Minnesota).

On September 15, representatives of the two nations find themselves on the site of modern day Duluth, Minnesota. The peace must last and the alliance with the French must be strong enough for the Sioux and the Saulteurs to reserve all their furs for the French. ” I could think of no better way” , wrote Dulhut, ” to cement the alliance than arranging for reciprocal marriages between the members of both tribes, one with the other, which is something that I cannot do inexpensively.” In the months that follow, Dulhut charms his allies with ” great expenditures on gifts “, hunting expeditions and communal celebrations.

The rescue of Louis Hennepin

From the natives around Lake Superior, Daniel Greysolon Dulhut learned of the existence of the Western or Vermilion Sea. Dulhut’s companions claimed they saw salt from that sea, within twenty days travel of Lake Superior.

Dulhut wants to find this sea, which may have been Salt Lake, Utah. And so, in the spring of 1680, he heads out with two canoes and five men. On June 25, having reached the Mississippi via the Sainte-Croix River, the explorer learns that three of Cavelier de La Salle’s companions, the Recollet friar, Louis Hennepin and “two other Frenchmen, had been kidnapped and enslaved” by the Sioux.

The search for the Pacific is postponed as Dulhut and his companions go south on the Mississippi, to somewhere near the Wisconsin River. Dulhut returns Hennepin and his friends to Michillimakinac. It is uncertain which route they used but many believe that the logical path was to head east is up the Wisconsin and Fox Rivers, to Green Bay, where the Saint-François-Xavier mission was located, and then north around Lake Michigan.

While in Michillimakinac, Dulhut learns that he is being slandered in Québec and Montréal. The merchants are annoyed by the personal fame and power he has acquired in the West and the Intendant, Jacques Duchesneau, does not hesitate to accuse him of trafficking with the English and of being the leader of those traitors who refuse to obey the decree of 1676.

He leaves Michillimakinac for Québec on March 29, 1681. While Duchesneau refuses to see Dulhut or to listen to his explanations, Frontenac protects him and encourages him to return to France to plead his case and to ask that he be granted the ownership of a post that he would build on Lake Superior. He leaves in the fall of 1681 and returns a year later. He had not obtained what he was seeking and, in the meantime, Cavelier de La Salle had taken advantage of his absence to darken his reputation. As an explorer, he is stymied: Louis XIV has just expressed his doubts on the value of exploring the continent and wants to limit them to those started by “le sieur De la Salle to the mouth of the Mississippi River.”

Although an ambassador, Dulhut thought like a military man. To prevent New France’s enemies from reaching Michigan, he fortifies Michillimakinac. From the Lake Superior side, the construction of forts Kaministiquia (Fort William), La Manne and La Tourette, will block access to Lake Nipigon, the Albany River and Hudson’s Bay. In 1686, on the orders of Jacques Brisay de Denonville, de La Barre’s successor, he heads for the strait that joins Lakes Erie and Huron where he builds Fort Saint-Joseph.

Until the spring of 1689, when he is recalled to the colony, Daniel Greysolon Dulhut ensures that the authority of New France in the Great Lakes area is never questioned. Later, except for a battle with the Iroquois at Lac des Deux-Montagnes and a stay of several months at Fort Frontenac in 1695, he lives a quiet life in Montréal.

After suffering from gout for several years, he dies in Montréal during the night of February 24 to 25, 1710, bequeathing part of his fortune to the family of Charles Delaunay, a tanner who had been caring for him. His reputation as an honest man and a good soldier was never in any doubt.