The history of New France is one of discovery. Cartier and Champlain, Cavelier de La Salle and La Vérendrye, to name but a few, pushed back the frontiers of the territory known to the French. Discovery was, it must be said, two-sided. For Aboriginal peoples, who had occupied the territory for millennia, the encounter with newcomers was just as critical. Territorial expansion and the promotion of human relations went hand in hand. 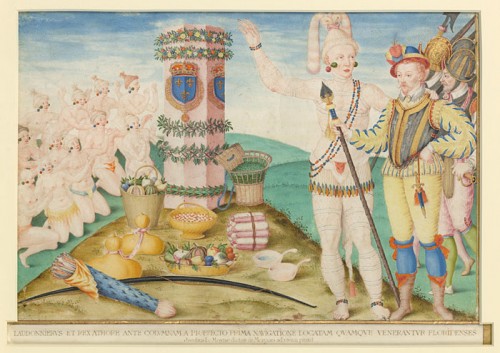 During this period of European expansion, the French did not focus exclusively on the area that would become New France. Before settling there, they sought in vain to establish themselves in what is now Florida and Brazil. Later, they settled not only in North America, but also in the West Indies, and they established trading posts as far away as Africa and Asia. The French, moreover, were not the only ones to put out to sea with their sights set on founding colonies. The Spanish and the Portuguese were ahead of the game; the English and the Dutch also embarked on voyages of exploration. By looking at the entire colonized world, we gain insight into what was specific about New France and come to understand its place in history.

Relations between the French in the Americas and their Aboriginal and European neighbours shifted over time and depending on circumstances. Officers and missionaries improvised as diplomats. The expansion of trade networks and alliances resulted in geopolitical disturbances. The history of New France was marked by battles, sieges and violence. Against the Iroquois, the Fox, the Natchez and the Chickasaw, the French were sometimes on the defensive, and sometimes on the offensive. At the same time, competition between colonies and rivalry among the major European powers regularly sparked enmity. It was through these recurring conflicts that the colony evolved.