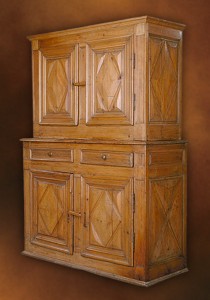 Two-tiered buffet in the Louis XIII style, first quarter of the eighteenth century

What were the everyday pastimes and occupations of the inhabitants of New France? Between working in the fields and clearing the land, between guard duty and voyages of exploration what did people do for entertainment? How did they adapt construction methods to achieve a degree of comfort and protection from the severe cold of the Canadian winter?

Having left a country that was as “full as an egg,” as Fernand Braudel remarked, French immigrants landed in a vast territory with seemingly endless possibilities. Of course there were diseases, shortages and delayed arrivals of supplies in spring, but the colony offered a rich, diversified range of flora and fauna. Game, fish, waterfowl and all kinds of herbs soon found their way onto the dinner table if not into the pharmacopoeia!

To occupy their free time, the inhabitants held soirées, when they would gather to tell stories, or to share in celebrations. In town, many people would go to inns and taverns. There, they would drink spirits and play cards, billiards, backgammon or dice. Gambling, already popular in the 1600s, became even more so during the following century.

Communications between the colony and the motherland were conducted through sealed missives and letters, but the large distances that separated sender and receiver were such that it was difficult to maintain an “up-to-date” epistolary relationship!