Nunavut—meaning “our land” in Inuktitut—stretches more than 1.9 million square kilometers and includes over 40% of Canada’s coastlines, touching both the Atlantic and Arctic Oceans. Vast and unforgiving, the land’s stunning beauty transforms every spring when the winter darkness recedes, its blanket of ice melts into fast flowing rivers, and wildflowers and lichen blossom in a firework of colour across the countryside. Respect for the land, animals and environment is entrenched in Inuit values. 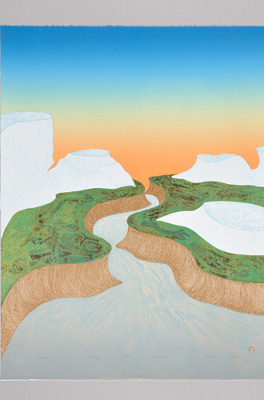 Life on the land has changed dramatically over the last few generations. In the early 20th century, Inuit lived on the land in small encampments and moved with the seasons from the coasts to inland, living in snow igloos in the winter and sod houses or tents in the summer, where they hunted, traded with other Inuit and southerners, and socialized. In the 1950s and 1960s, increased government services across the Arctic—and with it, jobs, education and healthcare—brought Inuit into the growing communities to live permanently. Although modern amenities are available in communities today, people try to escape the bustle of community life to spend weeks on the land camping, where they can enjoy the natural beauty and bounty of Nunavut. The land is vitally important to Inuit culture and is frequently depicted in graphic arts.