For countless generations, elders passed down vibrant myths and stories to the young—sometimes communicated through narrative storytelling, sometimes through song. These stories helped teach moral lessons and values, respect for one another and the world, spiritual matters and supernatural beliefs. While a number of these old stories have been forgotten, many live on through graphic arts. 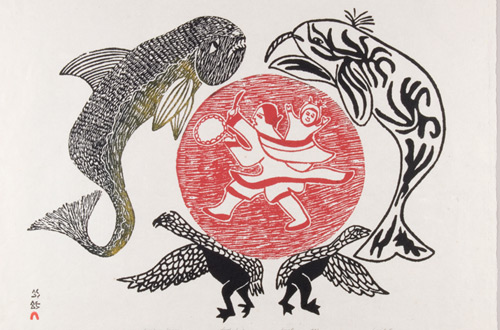 One story shared across much of the Arctic told of the underwater sea goddess, Sedna, or as she is known elsewhere, Talilayuk or Nuliajuk. As a young woman, Sedna angered her father after refusing the offers of many suitors. One day, as they traveled by boat, Sedna’s father threw her overboard hoping to rid himself of his burdensome daughter. Sedna grasped the side of the boat to save herself, but as she did so, her father took out his knife and chopped at her fingers. Her fingers fell into the sea and turned into a seal, a walrus, a whale and a fish. Sedna, too, fell into the sea and continues to reside there in the guise of a half-fish half-human. She is the mother of all sea animals.