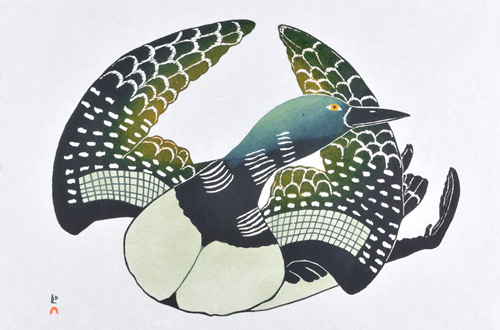 For over one thousand years, Inuit have lived off the Arctic’s rich natural bounty of marine mammals, fish, an array of land animals and birds. In earlier times, families lived on the land in snow igloos and skin tents, moving with the seasons to hunt seals, walrus, whales, caribou, geese, and musk-oxen. These animals provided nourishing food, skin for clothing, lamp oil and most of the raw materials from which tools, games and goods were made. Other animals, all uniquely adapted to live above the treeline, were vitally important to Inuit too: polar bears, foxes, wolves, hares, wolverine, ground squirrels, weasels, lemmings, fishes and clams. Unsurprisingly, animals are frequently depicted in Cape Dorset prints, and evoke the longstanding bond between Inuit and their natural world.