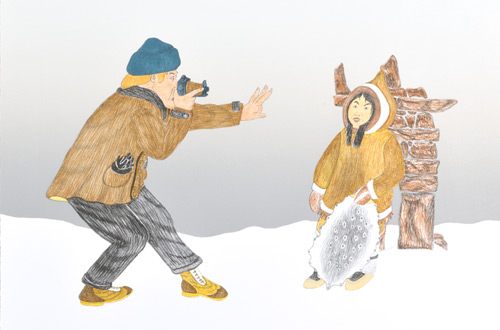 Steeped in memories, many prints document the history of the North, including the profound changes that came with the arrival of the Missionaries, traders and RCMP in the early twentieth century. Other historical prints show aspects of a traditional life—old games, ways of hunting and traveling on the land, traditional clothing—that was practiced long ago. Although many prints capture events from living memory, others show life as it was imagined to have been, or based upon stories told of yesteryear. Some memory prints describe individual histories and have personal meanings known largely to the artist. At times humorous, at times harrowing, they tell of the trials and tribulations of days gone by.