The Museum is closed due to the latest COVID-19 restrictions and will reopen on January 27, 2022.

The Museum will continue to present rich and dynamic digital offerings on its website during the closure.

See All Hours
Plan Your Visit
Until January 3, 2016

“This run is not for me. It’s for people like you who someday may have to fight what I have had to.” – Terry Fox

In the summer of 1980, a young man with an artificial leg and a courageous heart galvanized the nation behind his dream: to find a cure for cancer. Relive Terry Fox’s heroic Marathon of Hope with a unique exhibition marking the 35th anniversary of his cross-Canada run. Artifacts, photographs, interviews, press clippings, and journal entries allow visitors to retrace Terry’s 143-day, 5,300 kilometre journey from St. John’s, Newfoundland, to Thunder Bay, Ontario. Explore the deep affection Canadians have for Terry and see how his legacy continues to inspire us.

This exhibition is organized by the Canadian Museum of History, in partnership with the Terry Fox Centre. 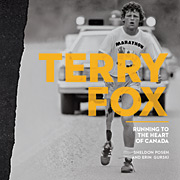 Complete your visit by picking up the Terry Fox souvenir catalogue, on sale online and at the Museum Gift Shop

Teachers:
To help your students get the most out of this exhibition, please consider including the activity sheet.