The French had arrived in northeastern North America as minor players in a longstanding Indigenous alliance system. By 1701, although Indigenous powers still dominated regional affairs, the newcomers played an increasingly important role.

By 1701, after an exhausting half century of war, peace was in everyone’s interest. The Huron-Wendat leader Kondiaronk advocated a peace treaty that would include all belligerent nations. More than thirty nations attended a peace conference in Montréal, conducted according to Indigenous conventions. Under the resulting treaty, former enemies agreed to free prisoners and settle future disputes through diplomacy. The Haudenosaunee agreed to remain neutral in future French-English conflicts. The signatory nations agreed to share access to resources while respecting each other’s territories.

After 1650, the Haudenosaunee looked eastward, hoping to prevent further French expansion. But war and disease had taken their toll. Political divisions made it hard for the Haudenosaunee to confront the army that France sent to Canada in 1665, and Anishinabe defenders checked their northward expansion. The English in New York, whose help the Haudenosaunee requested, proved unreliable allies. In 1701, a treaty, called the Great Peace of Montréal, ended decades of war. Both sides could now claim victory.

In the late 1600s, the French strengthened their position. In 1673, they built Fort Cataraqui (or Fort Frontenac, now Kingston, Ontario) to protect the interior fur trade. The Haudenosaunee responded forcefully, but also with a willingness to negotiate. Otreouti, or Grangula, a leading Haudenosaunee chief, negotiated with both the French and the English to secure his people’s interests. The pipe and wampum belt in this engraving were the main symbols of Haudenosaunee diplomacy. 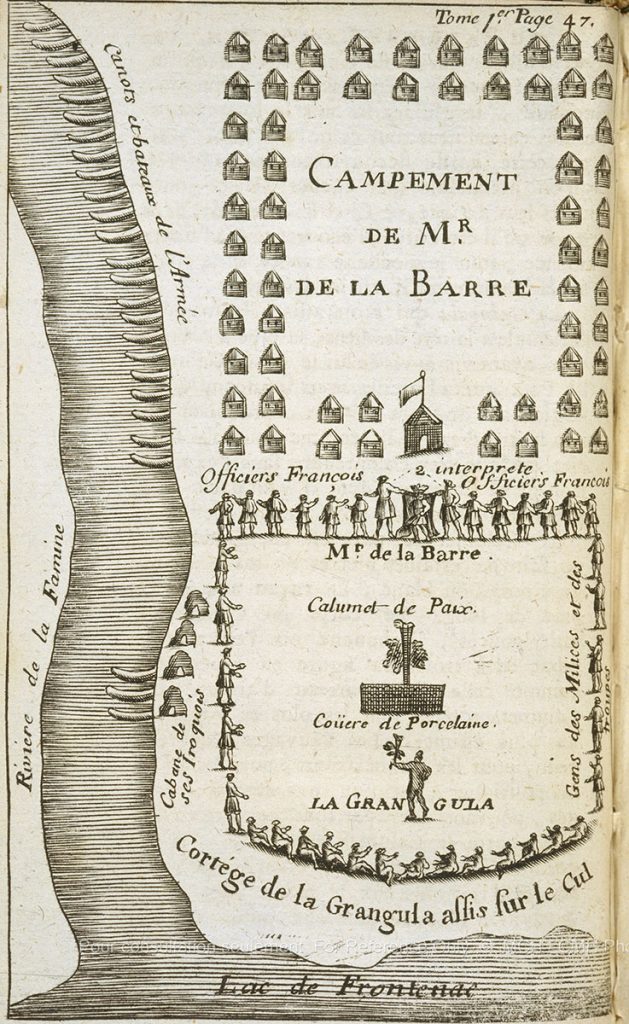 Note: This interactive feature is presented in the Canadian History Hall and is provided here online, as-is.

The Great Peace of Montréal, 1701. Explore the document!