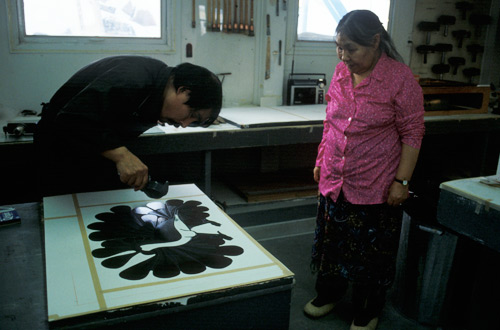 The printmaker copies the source drawing onto a flattened stone block. He or she carefully chips away the unnecessary stone, leaving a raised surface upon which coloured inks are rolled with a brayer. Because the ink is applied to a raised surface, stonecut (like woodcut or linocut) is known as “relief” print.

Next, the printmaker lays a sheet of thin paper on the inked block and rubs the back of the paper by hand, usually using a flattened tool to apply even pressure and get better absorption. After the ink has soaked into the paper, the paper is slowly peeled from the stone block to reveal a sharp printed impression. The image appears in reverse of the original drawing. 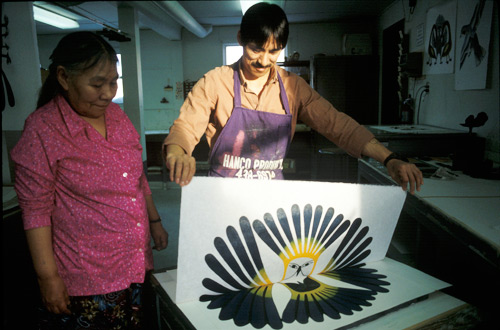 Kenojuak Ashevak and Qavavau Manumie in the process of creating the print "The Sun's Return", created by the stonecut and stencil technique photo Jimmy Manning, 1992-1993,
IMG2008-0938-0015-S, Photo © CMC

The printmaker creates not more than 50 prints from a stone block, plus five “proof” copies, before the block is ground flat. The block is used again for the next print. This technique is much like the woodcut print technique from Japan, however, the Cape Dorset studio uses stone—abundant in the Arctic—instead of wood, a softer material. 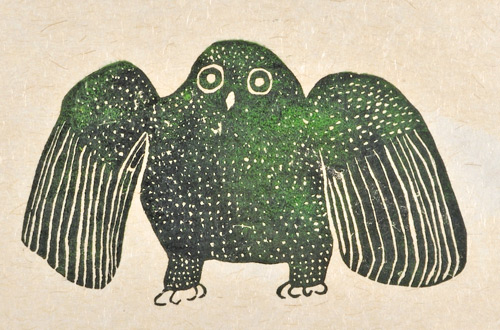 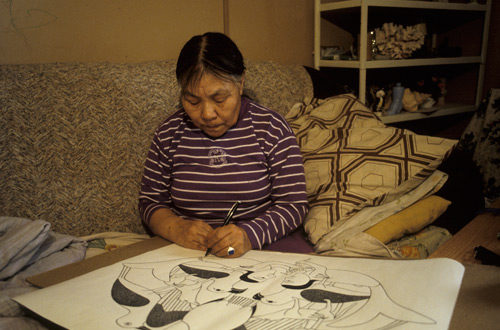 A “roller” used to apply an even coat of ink on a print block.
Bibliography Credits