These three techniques share the same basic principle. The printmaker cuts shallow grooves or pits into an otherwise flat metal printing plate. Ink is applied to the surface of the plate and wiped off with a rag, leaving ink behind only in the shallow grooves. Moistened paper is laid on the inked plate and both are squeezed together with a mechanical, hand-cranked press. Under enormous pressure, the paper is pushed into the grooves, which allows the ink to soak into the desired areas.

Engraving, etching and aquatint differ in the manner in which grooves or pits are cut into the metal plate. 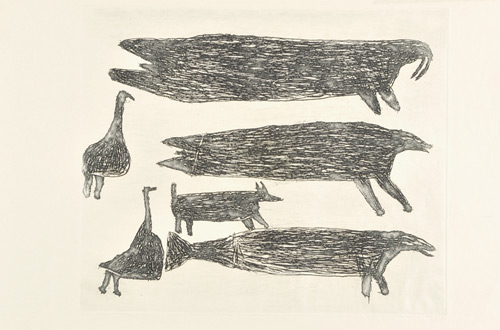 To create an engraving, the printmaker uses a cutting tool — a “graver” — made of hardened metal to score grooves into the plate, typically made of copper. This “drypoint” method often takes considerable effort on the part of the printmaker and results in fine lines.

To create an etching, the printmaker prepares the metal plate by covering it with a waxy resist material. With a needle-like tool, she or he scrapes a design into the waxy surface, which exposes the metal below. The printmaker then submerges the plate into an acid-bath, which gently bites away the exposed metal, and cuts the desired pits and grooves. Longer acid-baths result in deeper pits and darker printed lines. The waxy resist is washed off, the plate is inked as described above, and the print is made with a press. 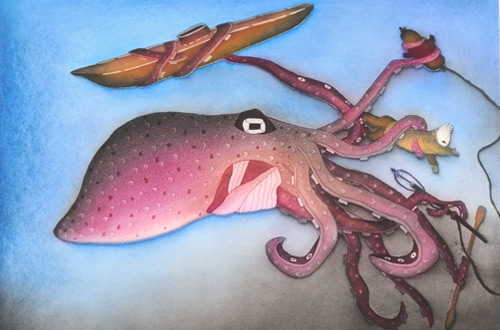 This is a variation of the etching technique, also using acids to bite away the metal plate. Instead of using a needle-like tool to scrape away the waxy resist, the printmaker sprays, pours, dusts or brushes a powdered or liquefied acid-resist resin directly onto the plate. By varying the depth and intensity of the resin, the printmaker may achieve subtle or dramatic areas of tonal variation. After the acid-bath, the metal plate is inked and the paper is printed like a standard etching or engraving. Aquatints may achieve very subtle tonal variations.