Long struggles by radicals and reformers made colonial governments answerable, or responsible, to their voters rather than the British Parliament. These victories brought far-reaching changes to the lives of ordinary British North Americans. They also set an important precedent for all other British settler colonies around the world.

From her accession in 1837, Queen Victoria reigned over a rapidly changing empire. Industrialization and commercial growth were eroding the economic links between Britain and its colonies.

Under the old imperial commercial system, British colonies had been essential sources of raw materials and privileged markets for manufactured goods. By the 1840s, Britain was dismantling this system in favour of freer trade. This loosening of ties allowed the settler colonies of British North America to pursue greater autonomy within the empire.

Rebellions in the Canadas

Before responsible government, Crown-appointed members of conservative local elites — known as Tories — monopolized political power in each of the settler colonies. Reform movements sought greater power for elected representatives of the people.

In the Maritime colonies, power passed quietly from appointed officials to elected politicians. In Upper and Lower Canada, the failure of peaceful attempts to reform the system led to armed rebellions in 1837 and 1838. Government forces crushed these risings and inflicted harsh reprisals: 1,500 people were arrested, 250 deported and 50 hanged.

These items recall the defence of Saint-Eustache by Lower Canada rebels in 1837 and the defeat of an invasion by American rebel sympathizers at the Battle of the Windmill in Upper Canada in 1838.

In 1838, the British government sent Lord Durham to investigate the causes of the rebellions and to recommend reforms. Durham made two recommendations: first, grant greater self-government; second, amalgamate the two colonies in order to engulf and assimilate francophone Lower Canadians, whom Durham considered “a people with no history and no literature.”

The Crown rejected the first recommendation but accepted the second. Under the 1840 Act of Union, Upper and Lower Canada were united under a single assembly and government. English became the sole official language.

Separate Upper and Lower Canadian identities persisted long after the union of the Canadas — a fact reflected by this boundary marker, inscribed with the old names “Upper Canada” and “Lower Canada”, and erected around 1860.

“No permanent or efficient remedy can be devised for the disorders of Lower Canada, except a fusion of the Government in that of one or more of the surrounding Provinces.”
Lord Durham, Governor General of British North America, 1839

Two failed rebellions discredited radicals who had tried to change the political system by force. Canadian reformers continued to work within the parliamentary system to achieve responsible government. This term refers to a government which depends upon the support of the elected assembly.

Many Tories condemned responsible government as disloyal and anti-British. Reformers noted that it had long been practised in Britain itself. Toronto reformers John Henry Dunn and Isaac Buchanan emphasized this point with banners featuring the imperial crown and a pro-British motto.

“I’m in favour of this English idea of responsible government… The colonists should have control over their own affairs. They should direct all their efforts toward this end; and to bring it about, we need the colonial administration to be formed and directed by and with the majority of representatives of the people.”
Louis-Hippolyte La Fontaine, political reformer, 1840

The Act of Union brought together French- and English-speaking reformers in a single elected assembly. Despite their linguistic and cultural differences, Louis-Hippolyte La Fontaine and Robert Baldwin joined forces to achieve responsible government. Their Reform Party won a solid majority in the 1848 election.

Due to new priorities, British attitudes had softened toward reform in the colonies. Acting on instructions from Britain, Governor General Lord Elgin called upon La Fontaine and Baldwin to form a government: the first responsible government in the United Canadas.

Louis-Hippolyte La Fontaine and Robert Baldwin put responsible government to immediate use, restoring French as an official language. In 1849, their government passed a bill compensating anyone, loyalist or rebel, who had suffered property losses during the rebellions.

Tories attacked the bill as a reward for treason and demanded that Governor General Lord Elgin veto it. But Elgin supported it, in accordance with the principle of responsible government. In response, a furious Tory mob pelted his carriage with paving stones, ransacked the parliament building in Montréal, and burned it to the ground.

As this cartoon attests, many Tories believed that the achievement of responsible government had empowered a reckless and immature electorate.

Spared from the Flames

Legislative councillor Joseph Bourret used this dispatch box to carry documents into the Upper House of Parliament in the 1840s and 1850s.

Responsible Government on the Ground 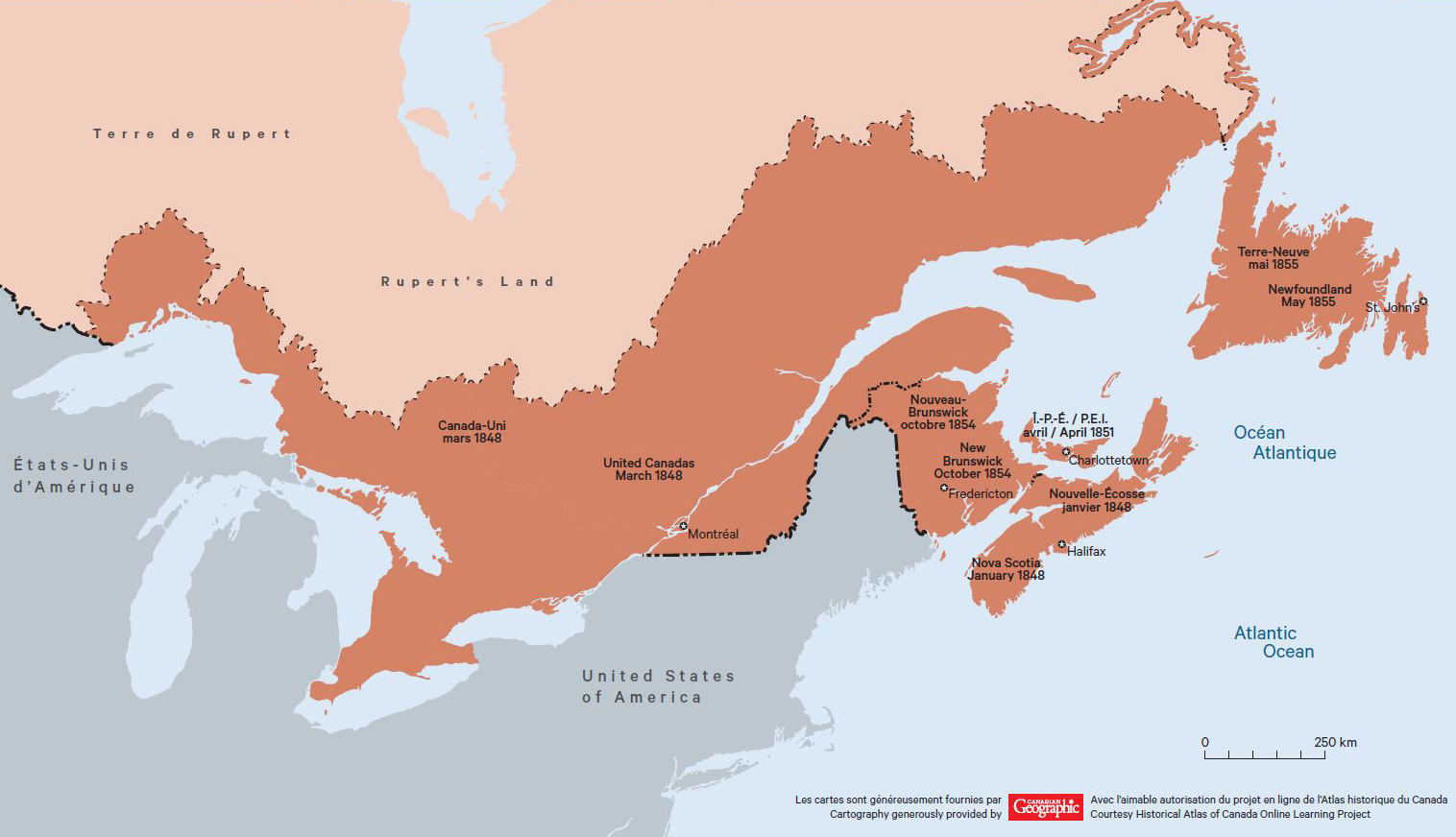 1) Portrait of James Boyle Uniacke, Premier of Nova Scotia
Artist unknown, 1848
With the permission of the Nova Scotia Legislative Library