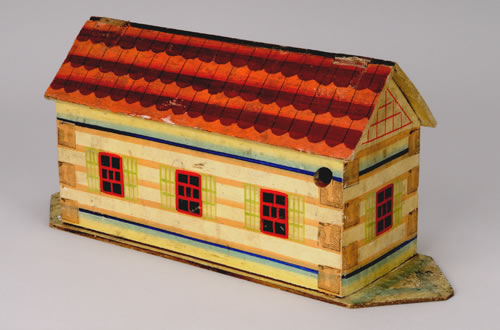 Early manufactured wooden toys played with in Canada were often imported from Europe. These included sets of wooden soldiers and the popular Noah’s Ark sets of cutout wooden animals and the box-like Ark to contain them. As playing with regular toys on a Sunday was frowned upon in many households, Noah’s ark with its Biblical message was a permitted and therefore popular toy.

As toy manufacturers tend to use materials that are found locally, Canada developed a long and continuous tradition of making wooden toys.

During World Wars I and II, Canadian manufacturers created more wooden toys to meet the shortage of imported toys and because metal was hard to obtain. The tradition of making wooden toys has continued and there has even been a resurgence of mass-produced "handmade" wooden toys in Canada.

There were three major Canadian manufacturers of wooden toys during the most productive time of Canadian toy manufacturing, between 1940 and 1960. Noma Toys Limited of Owen Sound, Ontario, made a series of wooden vehicles including cars, trucks, a tractor, and a large “Noma Super Skyliner,” modeled after the DC-4 aircraft, with pressboard wings and metal engines. The Toyland factory of Granby, Quebec, made pickup trucks and a “Happy Town” transport truck of painted wood. Monarch of Canada was one of many companies making wooden toys during the war when metal was hard to obtain. They made a series of wooden vehicles during WWII, including a military jeep, an “Army Truck” (No 10840), a fire truck marked "ARP" for Air Raid Patrol and a Fire Chief's car with a "V" for Victory sign.