A Peek into the History of Canada’s Ukrainian Community 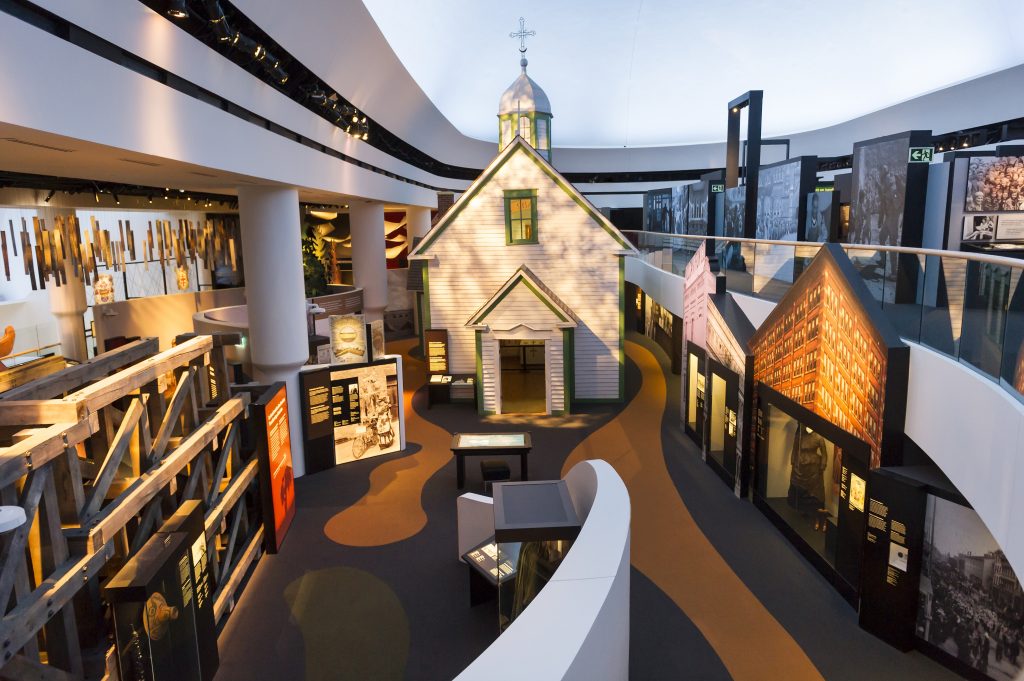 Now that the Museum is open again — hopefully for good this time — visitors to the Canadian History Hall won’t be able to miss the largest artifact among the 1,500 or more objects on display: an actual church, transported from the Prairies and reassembled inside the Canadian Museum of History.

The size of a one-room schoolhouse, St. Onuphrius Ukrainian Catholic Church was originally built in 1915 and renovated sporadically over the next 50 years to serve the community of Barich, near Smoky Lake in Alberta. Following its donation to the Museum in 1995–1996, it was dismantled board by board, transported to Gatineau, and meticulously rebuilt inside the Museum’s Canada Hall (the precursor to the Canadian History Hall).

Once the church had been completely rebuilt, it was reconsecrated. It was reconsecrated again following the construction of the Canadian History Hall, when the church was the only artifact left in place as the Hall developed around it. It remains a strikingly beautiful and intimate place of worship today, used for important religious services in the liturgical calendar, as well as for special community events, such as weddings and baptisms.

“St. Onuphrius is a living testament to how newcomers adapted to life in Canada as they settled on the Prairies,” says Dr. James Trepanier, Curator, Post-Confederation Canada, at the Canadian Museum of History. “The church is a centerpiece within the Canadian History Hall, its very inclusion sparking important conversations around community, faith and tradition.”

More than 170,000 Ukrainians came to Canada between 1891 and 1914, most of them settling in the Prairies. During the First World War (1914–1918), many Ukrainians were interned as “enemy aliens” — a story covered in greater depth in the exhibition Lost Liberties – The War Measures Act, on view at the Canadian Museum of History until September 5, 2022.

Today, Canada’s Ukrainian community numbers some 1.4 million people and remains a vital part of this country’s social fabric. Against a backdrop of global war in years past, and in light of today’s heartrending conflict, St. Onuphrius serves not only as a reminder of the important role Ukrainians have played in building the Canada we know today, but also as a place of solace and hope.