How much do you know about Canadian history and culture? Find out by solving our crossword puzzle with challenging clues contributed by museums across the country. Discover fascinating facts, intriguing objects and amazing stories as you search online for the answers to clues about our country’s past and present.

Ready to test your knowledge? For the second year in a row, the Canadian War Museum and the Canadian Museum of History have created a crossword puzzle featuring challenging clues contributed by almost 50 cultural institutions across the country. 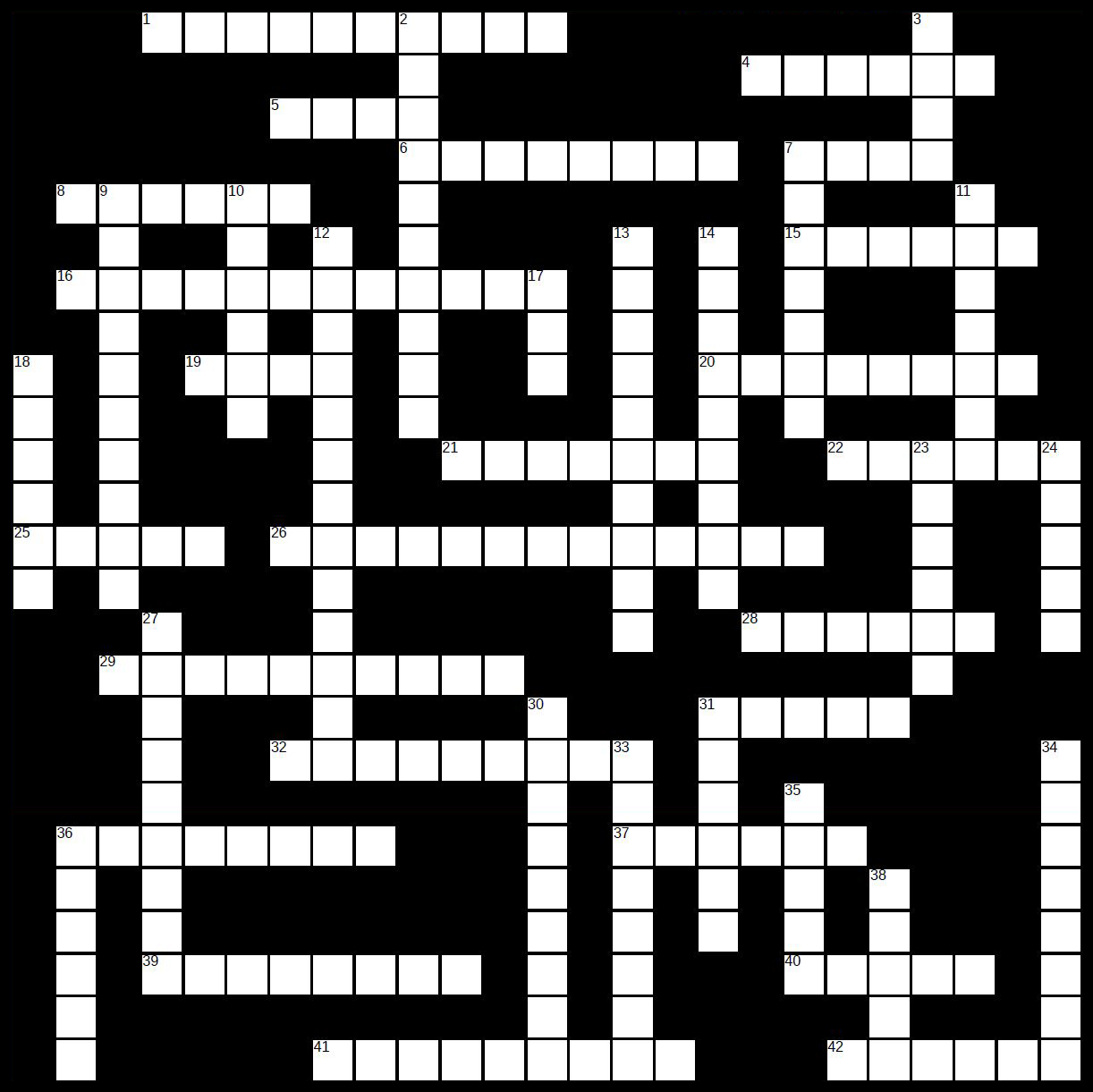 Play online, print the page or download a PDF.

Links to clues will open in a new browser window.

1. In 1935, J. A. Bombardier built a vehicle that ran on caterpillar tracks like those used on tanks. Visit the Canada Science and Technology Museum for a hint.

4. Inuktitut name for Arctic hare. Visit the Canadian Museum of Nature for a hint.

5. Approximately 100 Anishinaabeg fought to defend what’s now Toronto in the Battle of ______ on April 27, 1813. Visit Fort York National Historic Site for a hint.

6. Northern British Columbia was home to the only 50-kilovolt rail line in Canada. The 6001 _______ locomotive at the Central BC Railway & Forestry Museum is the last remaining engine of its kind that ran on this BC Rail line.

7. Residents of Kelowna have celebrated Folkfest each Canada Day since the early 1970s. During the multicultural festival, the city’s cultural groups share traditional foods, crafts, songs and dances for the community. Attendees look forward to the huge Canada Day birthday ____.

8. The Children of Peace played a role in the development of democracy in ______ through their support of William Lyon Mackenzie and by ensuring the elections of “fathers of responsible government” in 1841. Visit the Sharon Temple National Historic Site and Museum for a hint.

15. Braddish Billings settled on the banks of the ______ River in 1812, several years before development started nearby on what would become the national capital.

16. The Army Museum of Alberta, located at The Military Museums, features a staged photograph of this Indigenous female soldier from Muskeg Lake Cree Nation, Saskatchewan, in 1942 (2 words). She was recorded as the first Indigenous member in the Canadian Women’s Army Corps (CWAC).

19. Code name of the beach on which 14,000 Canadian troops of diverse backgrounds and ethnicities landed on D-Day, June 6, 1944, and the name of Canada’s Second World War museum in Normandy, France.

21. The word for a miniature model display. The one at Freeman Station is a 1/24 scale reproduction of the village of Burlington in the 1920s.

22. The _________ Mill, the oldest water-driven flour mill in North America, has been in constant operation since 1763. Visit Patrimoine culturel Vieux-Saint-Eustache for a hint.

25. The _______ County Archives includes a painting of the Southwold Earthworks, a designated National Historic Site of Canada. It is a rare and well-preserved example of an Indigenous fortified village completely surrounded by earthworks, built by the Attiwandaron (Neutral Nation) between about 1450 and 1550 A.D.

28. The Canadian War Museum collection includes boards from a __________ rink built by Canadian soldiers serving at Kandahar Airfield in Afghanistan.

31. In 1887, Victoria Settlement (in present-day Alberta) was renamed this, in honour of Cree Chief Pakannuk, also known as James Seenum.

32. This bronze and silver item inscribed in three different languages is used for finding the positions of stars and planets to determine the time of day in a particular location. Visit the Aga Khan Museum for a clue.

35. The first Inuk musician to break into the Canadian Top 40. Visit the Canadian Museum for Human Rights for a hint.

36. Traditional Inuit footwear made with moosehide and adorned with beads and fur.

38. World-renowned Canadian architect or brilliantly coloured songbird. The Canadian Museum of History has a hint.

39. The last name of a First Nations caretaker, beader and community leader in the Yukon and Northwest Territories.

40. __________ is a decorative art technique involving metalwork and enamel work originating in China and Japan as early as the 14th century. Visit Glanmore National Historic Site of Canada for a hint.

41. The _______ Dart is the first powered aircraft to fly in Canada — Baddeck, Nova Scotia, to be precise! Visit the Canada Aviation and Space Museum for a hint.

2. In 1867, Italian immigrant Carlo Onorato Catelli opened the first pasta factory in Canada in Old Montréal. Catelli also manufactured a line of typical Québécois foods. Can you name one of his products? (2 words)

3. He introduced Canada to a new strain of wheat in the 1840s. His first home is located at Lang Pioneer Village Museum.

7. This animal, pictured on the Canadian quarter, has been hunted for over 8,000 years by the Innu people who inhabit the North Shore of Quebec.

9. The ____________ program is a platform to tell stories that build connections and are inclusive of all voices. Check out the Toronto History Museums website for a hint.

10. This kind of canoe, made by hollowing out an ancient cedar tree trunk and steaming it into shape, was made during the resurgence of the Haida tradition of canoe-building in the late 1960s. Visit the Canadian Canoe Museum for a hint.

11. Famous for his speed and power as a champion sprinter, Donovan Bailey immigrated to Canada at age 12 from _______. Visit the Canadian Museum of Immigration for a hint.

12. Built in 1821, the Free Meeting House is one of Moncton’s oldest standing public buildings. Its purpose was to serve as a home for all religious ___________. Visit the Resurgo Place website for a hint.

13. The Anishinaabe word for “the place of the fish fence” in the Lake Simcoe region and also the name of a First Nation.

14. The name of the ship that sailed from Britain to Halifax and on which survivor Nathan Cytryn immigrated to Canada in 1947.

17. This tool was used to harvest heavy ice from ponds and lakes. It has a removable tiller blade and double-grip handle. Visit the Canada Agriculture and Food Museum for a hint.

18. Based on a traditional story, this Mi’kmaq game is played with bone dice and wooden sticks on a circular dish, usually made of rock maple.

23. In Montréal, in 1731, there were more than 186 of these. Château Ramezay has one in the style cultivated by Montréal’s nobility in the 18th century.

27. The original French name for the Island from which Bob-Lo amusement park (now defunct) was named. Visit the Museum Windsor for a clue.

30. Named after a famous Italian explorer, this 1851 New Brunswick-built ship became known as the fastest ship in the world (two words). Visit the New Brunswick Museum for more information.

31. The Chief ________ pictograph is the only known document in Canada showing the terms of a treaty from an Indigenous perspective.

33. Pehonan is the Nehiyawak (Cree) word for a gathering place that encompasses both the grounds of the Legislative Building and the neighbourhood of Rossdale Flats in _________.

38. Where the largest Viking in Canada stands.