Journal of fashion, culture and fine arts, launched in 1876 by the Butterick Pattern Company ...

Images from the Library
and Archives

The nineteenth century is known for variety, ornamentation and rapid changes in women’s fashion. Undergarments such as corsets and bustles moulded the female body into ever-changing silhouettes. Procuring clothing for herself and her family was a considerable task for any woman, whether the sewing was done by hand, by a hired dressmaker, or, later in the century, by mastering one of the new sewing machines. 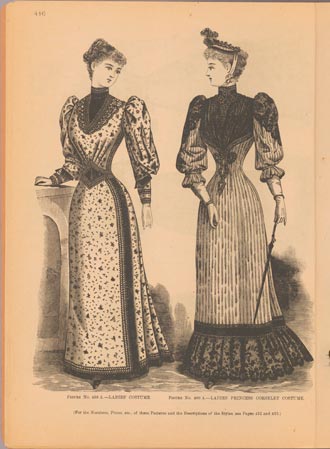 Fashion plates from the journal The Delineator Nov. 1892, Photo © CMH

Women’s magazines such as The Delineator, which was launched in 1876 by the Butterick Pattern Company and was published in Toronto for several years, offered stylish dress patterns. Articles of clothing in fashion magazines were typically identified by the time of day and activity for which they were intended: for example, dresses for afternoon, cycling or walking. Fashion illustrations depicted the newest styles, in patterns that were available by mail order: a more economical choice than acquiring a fashionable dress from Europe or an urban Canadian centre such as Montreal or Toronto.

In the 1830s, dresses were particularly wide. A dress worn by a member of the Reynolds family of New Brunswick shows this early fashionable shape, with its popular voluminous gigot-style sleeves. The crinoline or hoop skirt was introduced in the 1850s, changing the ideal form again — this time to include a bell-shaped shirt. The fashionable silhouette continued to change for women from the bustle, which perched at the back of the dress, to the smooth lines of an hourglass shape by the close of the century. As seen in a later dress belonging to a member of the Reynolds family — which had a peplum added to the bodice to maintain a fashionable look — middle-class Canadian women frequently had to modify their clothing to keep up with the trends.