Before the discovery of the process of heat-treating rubber (called ‘vulcanization’) in 1940, natural rubber products were short-lived, becoming brittle or gumming together when exposed to natural sunlight.

The first rubber toys were made in 1850, some 45 years before the first rubber automobile tires. During World War I, Germany developed synthetic rubber, leading to a massive development in the rubber industry world-wide.

The production of rubber toys in the United States began in 1935 with a line of rubber soldiers made by the Auburn Rubber Company of Auburn, Indiana. When the market for automotive tires and tubes declined during the Great Depression, the company successfully switched to making toys. With the price of rubber toys falling below the price of metal toys, Auburn Rubber was able to expand the toy production to meet the needs of families with little cash. Auburn Rubber made a wide range of wheeled toys: cars, trucks, racing cars and trains. The rubber toys were spray-painted and the drivers’ faces were often painted by hand.

Although Auburn Rubber was the most prolific maker of rubber toys, there were a least six other companies making rubber toys in the USA. The next most productive company was the Sun Rubber Company of Barberton, Ohio, also known as “Sunruco”. 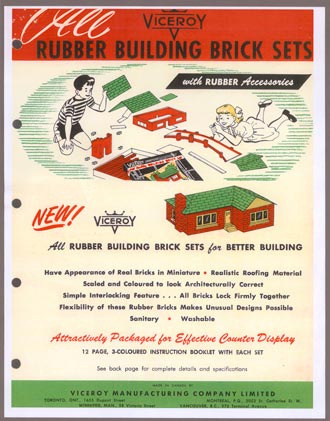 During the Second World War, the making of rubber toys was banned because the materials was needed for the war effort and children were encouraged to donate their rubber toys for conversion to military products. Toy soldier and military vehicles were popular when toy production resumed after World War II.

The Viceroy Manufacturing Company began the production of rubber toys in Toronto in 1930. Viceroy produced an extensive array of balls: sports balls, toys balls, and specialty balls, as well as rubber bath toys and beach toys. They also manufactured rubber and vinyl dolls and small toy cars and trucks.

Rubber toys still suffer from deterioration in their material over time. The toys become brittle and warp, crack and sag as they age.