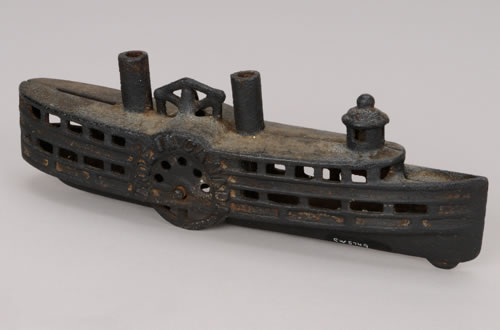 Toys can show us some of the changes people and societies go through as a nation’s economy develops and changes. For example, Canadian-made cast iron toys were made as the country was industrializing in the nineteenth century.

Many of the common manufactured toys played with in Canada between the late 1800s and the First World War were made of cast iron; horse-drawn vehicles of all shapes and descriptions, banks (made in the form of anything from animals to ships), stoves, vehicles (cars, trucks, and trains), cap guns, and cannons.

Some of the cast iron toys were complex, with realistic detail. For example, the "Kresge's Katalog" of 1913 shows an 11-inch hook and ladder priced at 10 cents with this description: "Hook and Ladder. Wagon painted red and ladder painted yellow. Detachable ladder, driver, and horse."

Many of the cast iron toys of the early 1900s in particular are not identified. Some cast iron toys are marked "Made in Canada," but we don’t know much about the Canadian manufacturers, neither the Canadian companies nor the American-owned companies. In Canada, even among toy collectors, not many people are even aware of the existence of Canadian-made cast iron toys. 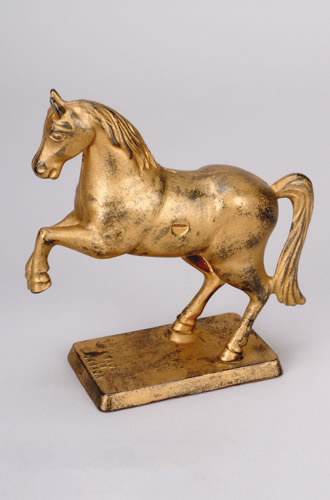 Although little is known about the Canadian production of cast iron toys, it seems likely that many of the toys similar to the Williams Company toys, including the sedan car and “Prancing Horse” bank, both marked "Made in Canada," were made by the Beaverton Toy Company between 1918 and 1930.

The arrangements for use of the U.S. designs are not known. There is no evidence of the cast iron toys marked “Made in Canada” being made anywhere else, so it seems likely that all of these marked toys were made at the Beaverton Foundry in Beaverton, about 75 km north-east of Toronto, Ontario.

Cast iron toy vehicles were also made in Canada by the American company Kilgore, probably in Waterloo, Quebec. The cast iron cars made by Kilgore in Canada are only identifiable as Canadian by an attached round paper sticker reading "Made in Canada" or "Kilgore Made in Canada," though the wheels are different from the U.S. version. The known vehicles produced are a roadster, a sedan, and a stake truck, some of which may have been available as part of an interchangeable set.