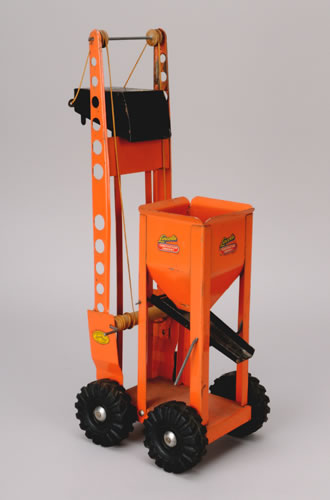 Lincoln Toys of Windsor, Ontario, made and distributed a large line of pressed steel toy trucks, tractors and even a TCA airplane. For many Canadians born after World War II, the wide range of pressed steel toy trucks known as Lincoln Toys were an important part of childhood. Lincoln Toys produced some of the best known and most commonly seen Canadian toys. Most examples show the obvious signs of children’s play, but one can occasionally find a Lincoln Toy still in its original box, in mint condition.

Lincoln Specialties, also based in Windsor, Ontario, was the distributor for the large line of pressed steel toys between 1946 and 1958. Windsor Steel and Ellwood Toys of Tilbury, Ontario are the two companies which originally produced the Lincoln Toys. Windsor Steel and Ellwood Toys went out of business in the late 1950s. However, their influence on toy design lasted long after as some toy trucks were kept in production by a series of companies, including Li’l Beaver Toys and Saturn Toys, until the early 1970s. The original logo of Li’l Beaver Trucks, a division of Irwin Toys of Toronto, contains both of Canada’s best known symbols, the beaver and the maple leaf.