In Canada, mechanical toys made in Europe, the United States, and Japan were available from about 1900 on. The only Canadian company known to have made mechanical toys was the General Metal Toy Company of Toronto, which started production in 1941 and ended in about 1964.

General Metal Toys of Toronto, Ontario produced a line of paper on wood and metal musical pull toys early in their production. These pull toys included a horse pulling a musical wheel, a drum-playing cat, and a drum-playing Mickey Mouse manufactured in cooperation with the Walt Disney Corporation. General Metal produced their line of paper on wood and tin toys between 1941 and 1955 along with a series of stream-lined cars and other metal toys. Most General Metal toys are identical in design to toys made by various US companies, especially Marx and Buffalo Toys. 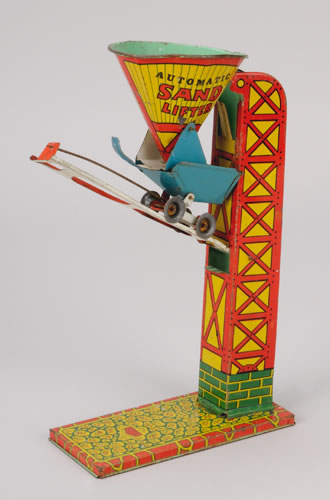 The company product summary for 1949, as printed in the 1949 Canadian Toy Fair catalogue, was "mechanical metal toys, musical tops, chime toys, telephones, washing machines, laundry sets." Most General Metal toys are copies of toys produced by American toy companies, but made in Canada after the U.S. manufacturers had ceased production.

Perhaps the most intricate of the General Metal is a wind-up painted tin "Ferris Wheel." It is a delightful Canadian mechanical toy with two 32 cm towers, four cars containing people, and lithographed clowns and fair-goers and signs reading; "Entrance" and "Tickets 5 c."

From comparing toys made by General Metal Toys of Toronto with American-made toys, it appears that General Metal did not design many toys of their own, but used previously produced toy designs. It is possible that they acquired the license to produce toy designs created by American toy makers, or they simply copied them without permission. General Metal made toys identical to those produced by several different American toy manufacturers, including Argo, Buffalo, Marx, and Wolverine.

For example, the General Metal set of tin toy furniture consisting of a refrigerator, cupboard, and stove, is identical to that made by the Wolverine Company in the USA. As the dating of these Canadian versions seems to be later than for their American counterparts, perhaps General Metal acquired the rights to produce these toys after their run in the USA had ended.