The lead soldiers, toy cannons, and miniature vehicles, aircraft, and battleships that were popular gifts for boys from the Victorian era to the 1950s show us a Canadian society that was both militaristic and imperialistic. Such toys have tended to disappear with changing attitudes, although toy guns, sets of toy soldiers and military vehicles of all sorts, still remain popular.

The most popular, realistic, and wide-ranging (culturally and geographically) sets were those produced by the Britains company of the United Kingdom. Sets of soldiers from virtually any country were available for those children and adults who enjoyed setting up replicas of famous battles. Canadians were represented by the Fort Henry Guards and the Royal Canadian Mounted Police.

When Canada's supply of imported toy soldiers from Britain slowed during WWII, United Industries (later Breslin Industries) produced a line of lead soldiers similar to the U.S.-made Manoil and Barclay figures. This company also made other lead-alloy toys, including a tank, motorized machine gun, truck pulling a cannon, and other toys, all of which were copies of American toys, but with “Canada” as part of the casting. 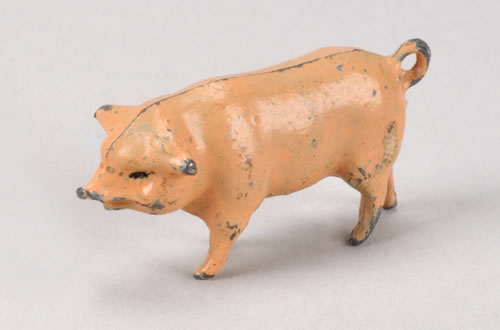 Non-military miniature lead figures in sets have also changed with our society. Farm sets failed to appeal to an urbanized society, and model railways were replaced by racing car sets. With the rising cost of metals and the potential health danger in lead figures, the metal miniatures were largely replaced by plastic figures in the 1950s.

Canada's toy industry today is largely a reflection of American trends, making toys that follow movies and T.V. shows, such as the Action Figure lines, suitable for both boys and girls. Most of our toys are imported from Asia where production costs are relatively low.