Play often involves socializing – we invite friends over and we need room to spread out. We have toys too complex and large to easily fit in a bedroom. Over the course of years, but particularly in the latter part of the 20th century, the development of a family room, or recreation room helped house larger toys.

Rec rooms also housed toys that produced movement, such as walking toys. “Walkie Toys of Canada” made seven known figures – among them Red Cross nurses, sailors, airmen, clowns, and penguins. Similar to American walker toys, these toys were constructed so that they would “walk” down a slight ramp. 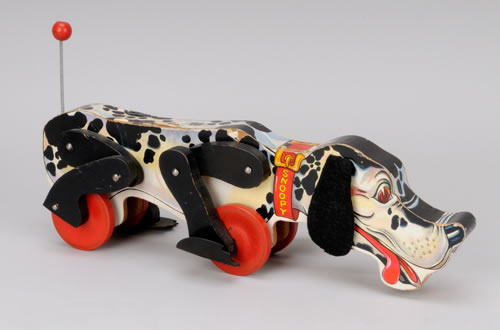 The American company Fisher-Price manufactured a number of classic pull toys from their beginnings in 1931. The “Snoopy Sniffer” pull toy dog is perhaps the best known of all pull-toys.

Play means learning. Some toys not only amuse kids for hours on end, they also allow children to practice reasoning skills, manual dexterity, and spatial awareness. Construction sets are among the most obvious examples of toys with this kind of extra “play value”. Today’s plastic Lego sets are a natural and modern extension of the traditional building blocks that children have used for millennia.