There are many links between play and the development of physical and intellectual skills. This is particularly obvious in those toys and games that mimic adult skills. Sometimes by design, and sometimes as an unintended by-product of their use, such toys build skills that are useful to children in later years. For example, toy microscopes and chemistry kits challenge the intellect, while toy tool kits promote proficiency in adult activities. Miniature pianos, toy guitars, accordions and harmonicas may introduce a child to a life of musical expression. 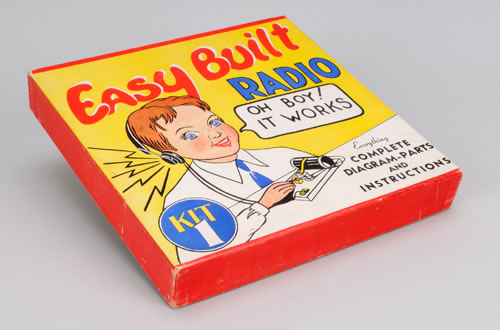 Societal developments are well illustrated by a study of the children’s toys each era has produced and this is especially clear in adult skills toys. The toy telegraph sets, popular before the First World War, were replaced in the 1920s with such toys as “Radio Games for Little Folks,” which in turn were replaced with portable computer games of today. 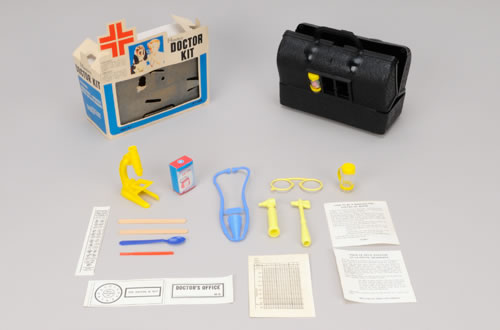 Toys that mimic adult skills or occupations may also encourage gender stereotypes, if not by their design, then by their packaging and marketing. Examples are doctor’s kits featuring a boy on the box and nurse’s kits consisting of exactly the same toys, with the exception perhaps of colour, in boxes depicting a girl. More recently, manufacturers have made concerted efforts to show both genders on much of their packaging.

In 1924, the Christmas Eaton’s toy book suggested things “for girls to do,” such as “You can really learn to cook with the MISS CANADA KITCHEN SET!” for $1.50 or “The MISS CANADA EMBROIDERY SET [which] includes stamped patterns for a sewing apron, sewing bag, and doll’s rompers” for $1.00. For the boys, there were “clever things to make,” like “a wooden toy, and paint it yourself” using a British-made fretwork tool kit for $3.00 or “how you can make Hydrogen, the gas used by many zeppelins” with the Chemcraft Set No.2 for $2.25.

In these earlier times, the intent of toys was clear, as was the case with a set of communion vessels (a church mass set) intended to encourage boys in early twentieth-century Quebec to play as priests.