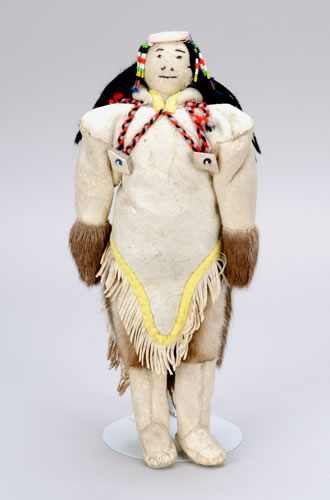 The early handmade dolls, toys, and games of the various First Nations and Inuit groups across Canada were the first Canadian toys. These early toys and games often show us a lot about the traditional activities of adults in different cultures.

Long winter nights in wigwams, iglus, longhouses and other homes were a perfect time for the making of toys. Children, watching their mothers sewing skin clothing for the family, learned to do the same. Using pieces of prepared animal skin and perhaps a bone needle, children made dolls and their clothing and carrying devices. With heads carved of wood or stone, dolls were dressed in skin clothes and decorated, as are the adult clothes, with beads or other available materials such as porcupine quills.

The earliest inhabitants of Canada would also have used their carving skills to produce small toys for their children, using the local materials available to them: bows and spears for the boys, tiny lamps and cooking pots for the girls and small animals perhaps for all children. 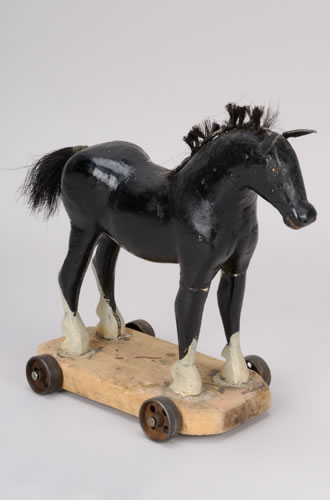 Members of the Canadian Arctic Expedition in 1914-1916 watched the young girls of the Copper Inuit cut out and sew clothes for their dolls. The dolls were made of animal skin, typically from 15 to 30 cm long. They were usually dressed in women’s clothes as these required more experience and skill in tailoring than men’s clothes.

Early toys from the time of the first European settlers were handmade, usually of wood, and were often made by fathers or grandfathers for their children or grandchildren. These toys were usually miniatures of the tools and devices used by the adults. Play allowed the child to practice being a grown-up as the toys would relate to everyday life around their villages and farms. There were tiny wooden cradles or beds, wooden utensils, bowls, carts pulled by oxen in harness, milk cans, pitch forks, all the items of the day made out of wood in child size. 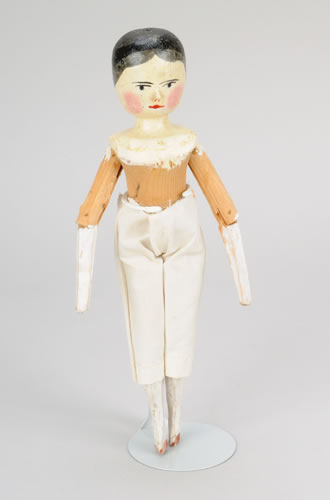 It was not uncommon for pioneer children to build their own toys, some of which were quite short-lived, such as used boxes, and some were long-lasting, like formations of stones for house foundations. Log cabins made from pieces of slender branches, notched and built carefully into log cabins entertained the boys for hours. Women sewing in the evenings likely encouraged their daughters to use cloth scraps to create clothing for their dolls.

Penny dolls arrived in Canada during the early 1800s, costing a penny each. They were crudely cut from wood by the poor in England and Germany, and had only painted faces. Nevertheless, children loved them dearly, and they became the model for more complicated dolls.

As manufactured toys became available in the late 1800s, handmade toys became less common. However with changing times and especially with economic depression, homemade toys made a resurgence.