Have you ever noticed the “pink aisle” in major toy stores? This is where you’ll find toys, games and other products meant for girls. But this isn’t a new development. Specifically designed toys teach girls how to be “women”, no matter if the year is 1811 or 2011.

Handmade dolls, toys and games of the various First Nations and Inuit groups across Canada were the first Canadian toys. These early toys and games often show us a lot about the traditional activities of adults in different cultures. This Huron cradle board is very much like those used to carry actual babies, but is for a little girl’s doll. For girls, long winter nights often included making dolls and their clothes – good practice for adulthood. 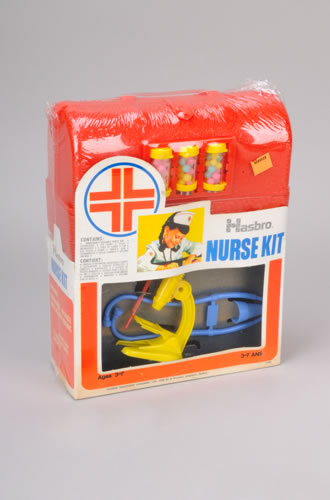 Toys that mimic adult occupations can also encourage gender stereotypes, if not by their design, then by packaging and marketing. Except for a few colour changes, the contents of this nurse’s kit are exactly the same as a boy-oriented doctor’s kit. The only real difference is the picture on the packaging – boys became doctors, girls became nurses.

Since their invention in the early part of the 20th century, teddy bears have generally become less bear-like and more baby-like, encouraging children, particularly girls, to care for and nurture them. Today, some stuffed animals have complex online personalities and virtual homes available for furnishing. 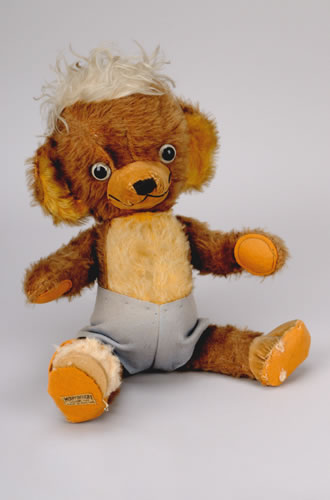 In the second half of the 1800s, Victorian-styled dollhouses became popular. They were usually made of wood, ornate and complex. Miniature kitchen sets of appliances, pots and pans, silver and china would occupy the happy owner for hours. Dollhouses and model buildings have given way to virtual versions in games such as “The Sims.”

Starting in the 1920’s, dolls began to be modelled after famous contemporary people. Dolls also began to have more interactive features with the child having more choices of activities and accessories.

The American toy maker Mattel’s “Barbie” brought big changes to the world of dolls. Barbie, representing a young woman out in the world, dressed for any and every occasion, was thus suitable for play by older children and even teens.

In Canada the Reliable Toy Company, at one time the largest toy factory in the British Empire, produced millions of dolls in hundreds of varieties. For more information on these, see the Reliable Toy section.