Board games have been played in most societies and cultures. Some board games have been with us for thousands of years, and are known from ancient archaeological sites. For example, the traditional board game “snakes and ladders” has been transformed through time and place: this Canadian version features snow and toboggans. 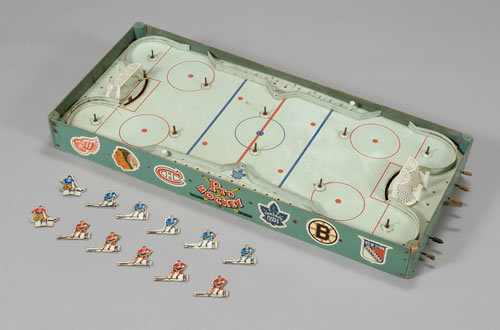 Board games reveal issues of the times during which they were created. Think of the sports games of the 1970s, the war games that appeared in the 1940s, and the “get wealthy” real estate games of the depressed 1930s such as Monopoly. This Chinese checkers game was made for Canada’s centennial in 1967.

Originally conceived as a wooden table-top game by the Munro Company in Burlington, table hockey games of the 1950s featured the Toronto Maple Leafs vs. the Montreal Canadiens. Although a modern twist on this classic are the many hockey-themed computer games, nothing quite beats the physical momentum of a table-top slapshot.