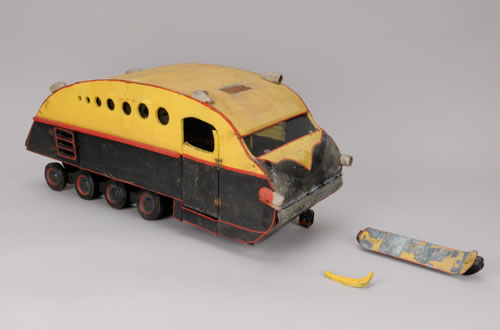 Look inside a boy’s bedroom – what toys and games will you find? Guns and swords? Cars and trucks? Toy manufacturers in Canada have produced toys designed to keep boys happy and active, but also with specific messages about masculinity in society. The content of the play may have changed over the years but the type of play hasn’t.

Boys don’t usually think of their playable figurative toys as “dolls”. Whether these toys are called action figures or toy soldiers, they are not usually nurtured and cared for; instead, they are often engaged in mock battles. The lead soldiers that were popular gifts for boys from the Victorian era to the 1950s show us a Canadian society that was both militaristic and imperialistic.

Canadian children had access to many varieties of plastic figures in play sets, many made in Europe and the United States, but some were made in Canada with Canadian themes. Among the latter were Cowboy and Indian sets complete with forts and villages made by the Reliable Toy Company. Reliable also made an extensive variety of plastic soldiers including various poses of riflemen, machine gunners, grenade throwers, and spotters. 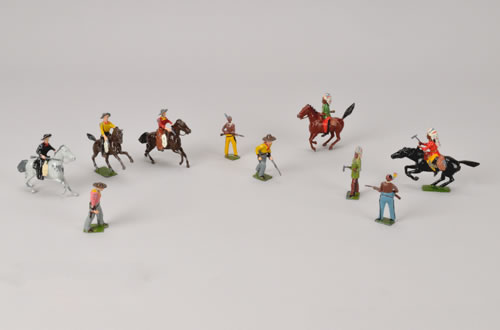 Webster Brothers, of London, Ontario, were the manufacturers of the “Londontoy” line of small cast metal vehicles, which included a line of wartime vehicles and play sets. Toys that were already in production in peace-time were given new military paint schemes. Beverage trucks became army trucks towing cannons and delivery trucks became military ambulances.

Small die-cast cars and trucks were made by London toy beginning in the 1940’s. Their cars, pick-up trucks, beverage trucks, and buses came in two sizes and several colours and were offered as part of different sets including a gas station and airport.

Handmade toys are unique. These special toys often have family significance, local or regional importance, or are just one-of-a-kind. Toys like this replica Bombardier snow machine are created for a single child, and would never be produced in numbers by a toy manufacturing company. To see more one-of-a-kind toys visit the Handmade Toys section.